Sunday marked the third and deadliest day of Israel’s latest offensive into the Gaza Strip, as both sides of the conflict reported a record number of deaths. At least 87 Palestinians died Sunday, Palestinian health officials said, the New York Times reports, while Israel’s military said Sunday that 13 Israeli soldiers were killed.

The deaths come as Israeli military forces escalated their ground offensive against Hamas militants on Sunday. Israel’s offensive in Gaza, which is targeting Hamas rocket sites and tunnels leading into Israel, began Thursday after several days of rocket and air attacks between Israel and Hamas as well as other Islamic factions in Gaza.

“From 12:30 a.m. until 4 a.m., all you could hear is heavy bombardment, the smell of fire and the smell of death. By 4:30, and after the call for the prayer, we were able to get in an ambulance,” said Jawad Hassanain, a Shijaiyah resident who fled to his sister’s neighborhood with his family after their house was shook by explosions.

The Shifa Hospital in Gaza quickly overflowed Sunday morning, with some doctors treating patients in the hallway. The Red Cross proposed a two-hour afternoon ceasefire to help evacuate the injured from the conflict zone Sunday, but that lull in fighting fell apart in under an hour, the Wall Street Journal reports.

The Palestinian death toll has reached 425 people since July 8, according to Palestinian health officials. Before the 13 soldiers were killed Saturday, Israel’s military said seven Israelis, including five other soldiers, had been killed. Israeli hospitals say dozens of soldiers have been wounded as well.

The most recent wave of violence between Israel and Hamas began after the abduction and murder of three Israeli teenagers and one Palestinian teen in June and July. 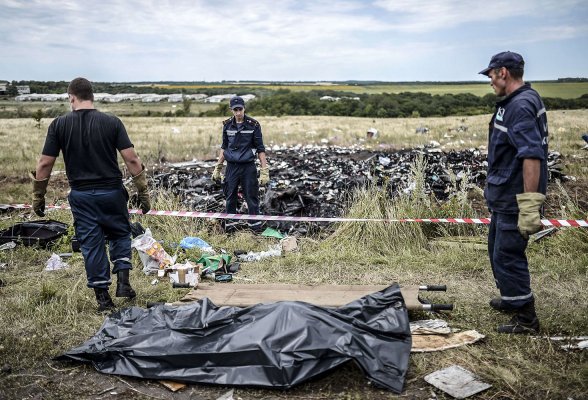