There are actors who become stars because they strike awe — because they’re imposing, powerful, monumental. And then there was James Garner.

Garner, who died Saturday night of natural causes at age 86, was no toothpick of a man — he was a former high school football and basketball player who kept his rugged, weathered good looks long into life. But the characters he became famous for, especially TV’s Bret Maverick and Jim Rockford, won you over with their minds. They got through trouble with cleverness, charm and subtle wit. Garner wasn’t the kind of star who won love because he seemed so elevated above you: he made you love him by showing you that he was on your level — had in fact spent some time down in the dirt, brushed off the dust, and moved on with a rascally smile.

Born James Scott Bumgarner in Norman, Okla., in 1928, Garner had experience rebounding from tough times early in life. His mother died when he was small, and his father remarried a woman who Garner would later recall was physically abusive. His family moved around the West, eventually settling in Los Angeles, where — after a stint in the Korean War — he was discovered for the movies.

The handsome Garner was a natural for westerns and war pictures and adventure movies. But the characters that proved the best fit for his natural, easygoing charm were anything but typical screen stars. He came of age as an actor in the heyday of the TV western, not by playing an upstanding lawman but as the wily, disarming card shark Bret Maverick in the action-comedy Maverick, a gambler and ladies’ man who had the fastest mind in the West.

Debuting in 1957, Maverick was a character ahead of his time in spirit, a forerunner of the little-guy heroes, the roguish, antiauthoritarians who would rule movies and TV in the 1970s. You can see a little bit of a proto–Bill Murray in the dry, sly Maverick, and if Star Wars had been made 20 years earlier, Garner would have been your Han Solo hands down. Garner stayed off TV for a decade after Maverick, but he had a great run in the movies in the 1960s, drama and comedy alike. (Support Your Local Sheriff! would be a great catch-up watch for anyone wanting to discover, or rediscover, his work.)

Garner’s most famous role, as Jim Rockford in The Rockford Files in 1974, was the perfect meeting of Garner’s talents and the spirit of the age. Like Bret Maverick, Rockford was a screen-hero archetype who became all the bigger for being cut down to size: a private detective who’d spent time in jail on a bad rap, always one step ahead of the bill collectors and one good night’s sleep shy of his peak. He was not a pressed suit; he was a rumpled jacket that could use a dry cleaning. And that was what made him wear so comfortably.

The Rockford Files was a crime show where the characters were finally more important than the action: it had its share of brawls and car spinouts, but you really tuned in for the ping-pong dialogue between Rockford and con man Angel or his dad Rocky. (It was a precursor of the more character-based dramas of today’s cable-dominated TV era, and in fact the show was one of the first writing jobs for David Chase of The Sopranos.) Rockford might get his man in the end, but what made him loveable was less his triumphs than his ability to roll with defeat. He could throw a punch if he had to, but what made him a hero was his ability to take one.

I was too young for the run of the original Maverick, but I relished the brief-lived revival, Bret Maverick, in 1981, and I caught Rockford both in its original run and reruns. As a nerdy, not-too-athletic kid, I was especially drawn to pop-culture trickster figures — Bugs Bunny, Hawkeye Pierce, scoundrels who outwitted their rivals instead of outfighting them. Jim Rockford was the only TV crime fighter I really cared about, a charmer who could indeed win for losing.

I got older, and so did Garner, but he kept working late into life — collecting an Oscar nomination in 1985 for Murphy’s Romance, making a return to TV in 2004 on 8 Simple Rules after the sudden death of John Ritter. But Rockford lingered somewhere in my mind, and I suspect the minds of a lot of TV fans from that era. Garner created him as a sunny, fundamentally decent example of how to get through frustrations and disappointments not with rage, but a wry comeback.

In the end, charm and humor wear more comfortably than rage and drama. Audiences love that kind of character. Fate loves that kind of character. If you need a quick thumbnail philosophy for living, it would not be a terrible one to simply remember to ask yourself, whenever you face adversity, “What would Jim Rockford do?” For posing that question, and giving it such an entertaining answer, thank you James Garner, and RIP. 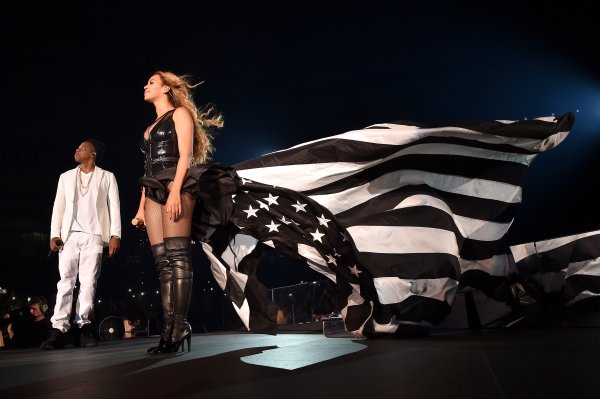 Beyoncé Teases Fifty Shades of Grey Trailer on Instagram
Next Up: Editor's Pick