The bodies recovered from the downed Malaysia Airlines Flight 17 will stay in refrigerated train cars in the insurgent-occupied town of Torez until U.N. aviation officials arrive, a top Ukrainian rebel leader said Sunday. The comments from Alexander Borodai, the self-appointed Prime Minister of a pro-Russian “People’s Republic” in eastern Ukraine, come after other European officials said rebels had rounded up victims’ bodies and put them on railcars bound for an unknown destination.

The rebels also said Sunday they will turn over the black boxes from the Boeing 777 to officials from the International Civil Aviation Organization, a U.N. body that oversees global aerospace issues. The aircraft’s black boxes were earlier rumored to have been sent to Moscow for examination.

Flight 17 is widely believed to have crashed in eastern Ukraine after being shot down Thursday.

Both Ukraine’s government and the rebel forces have alleged the other was responsible for downing the Boeing 777.

A spokeswoman for Ukraine’s government said rebels forced emergency teams to give up the bodies recovered at the crash site without revealing where they were taking the corpses. Associated Press journalists had previously reported seeing bodies in bags piled together in the heat on Saturday.

Borodai denied that rebel forces were interfering with the crash investigation and said he was disappointed with how long it had taken Malaysian aviation experts to arrive at the scene.

The U.S. embassy in Kiev has concluded “that Flight MH17 was likely downed by a SA-11 surface-to-air missile from separatist-controlled territory in eastern Ukraine.” It said Russia had supplied military equipment to the insurgents, though Russia has denied the claims. 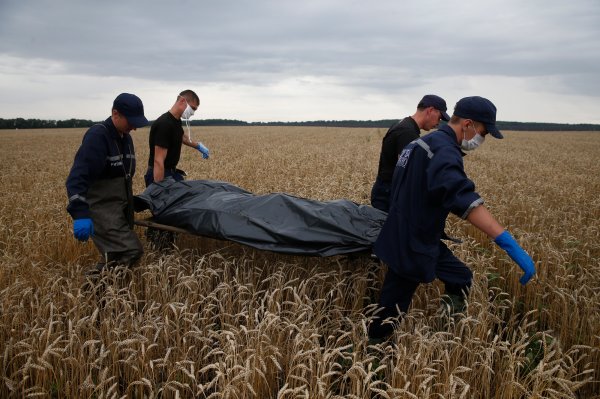 Ukraine Rebels Haul Away Victims of Malaysia Airlines Crash
Next Up: Editor's Pick