Protests Against Israel Ramp Up as Gaza Operation Continues

Protesters in demonstration against Israeli airstrikes in Gaza in central London on July 19, 2014.
Carl Court—AFP/Getty Images
By Sam Frizell

,Protests against the Israeli bombardment of Gaza intensified in global capitals from London to Istanbul Friday and Saturday, as Israel ramped up its military operations on the the Palestinian-controlled territory.

Thousands of protestors gathered in central London on Saturday to call for an end to Israeli military action in Gaza, with about 15,000 expected to take part in a march to the Israeli embassy in Kensington, the Guardian reports. The march comes a day after police removed 25 protestors who held banners reading “Stop arming Israel” while linking arms in London’s Whitehall building.

In Indian-controlled Kashmir, government forces on Saturday fired on protestors rallying against Israel’s invasion of Gaza, killing a teenage boy, Haaretz reports. Protestors have gathered in Kashmir every day since Israel launched its military campaign in Gaza, and have burned Israeli flags throughout the region.

Protestors in Istanbul pelted the Israeli consulate with stones this week, and in Ankara, draped Palestinian flags on the ambassador’s residence, Reuters reports. Israel responded Friday by reducing its diplomatic presence in the country.

In Berlin on Thursday, some protestors chanted anti-Semitic remarks after a pro-Palestinian demonstration, saying “Jew, Jew, cowardly pig, come on out and fight,” according to Haaretz.

The recent spate of violence between Israel and Hamas has claimed the lives of more than 300 Palestinians in the Gaza strip, as many as three-quarters of which have been civilians. Palestinian rocket fire into Israel has killed one Israeli. Israel has sent troops into Gaza in order to stop the rocket bombardment into its borders. 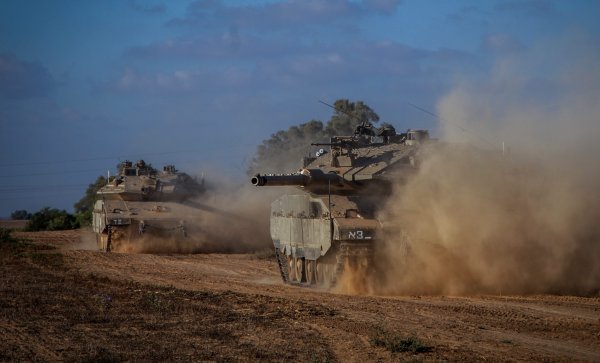 Israel May Expand Invasion
Next Up: Editor's Pick