Malaysia has stopped mincing their words. Ismail Nasaruddin, president at Malaysia Airlines staff union NUFAM, said the MH17 attack amounts to “murder,” and Transport Minister Liow Tiong Lai said the world has a “moral obligation” to ensure the safe recovery of remains as well as punishing those culpable. This was the message that came out of Kuala Lumpur on Saturday, after news that pro-Russian rebels have been restricting access to the crash site.

“Malaysia is deeply concerned that the crash site has not been properly secured,” said Liow, just ahead of leaving with the second Malaysian team bound for Ukraine to oversee the investigation. “There are indications that vital evidence has not been preserved … Citizens of 11 nations … cannot be laid to rest. Their lives were taken by violence; now violence stops them from being accorded their final respect. This cannot continue.”

The Ukrainian government has accused the rebels of moving at least 38 bodies from the crash site to a morgue in the rebel stronghold area of Donetsk, according to the New York Times. They also say that rebels have been hiding weaponry, missile fragments and other pieces of evidence. Rebel leaders have denied any interference.

Official Malaysian statements so far have been notably guarded, avoiding calling out an aggressive act as the cause of the crash. But the tone has sharpened considerably since armed separatists hindered a team of international observers from spending more than an hour at the wreckage site on Friday, and further indications pointed at a missile taking the airliner down.

At Saturday’s press conference, the country’s Transport Minister also junked claims of any wrongdoings of Malaysia Airlines in connection to the disaster. “MH17’s flight path was a busy major airway, like a highway in the sky,” Liow said. “It never strayed into restricted airspace. All sources say that a missile shot it down … this is an outrage that cannot go unpunished.” Azharuddin Abdul Rahman, director general of the Department of Civil Aviation, answered to a barrage of questions over the decision to fly at 33,000 ft. — a mere 1,000 ft. above the no-fly zone over the restive Ukrainian region — saying that this was the order the aircraft received from flight control.

Still, worries mount over the conflicted national carrier. Malaysia Airlines’ shares plummeted 11% on Friday, on top of an 83% plunge over the past five years. Some believe that the airline may even struggle to survive two such major disasters so close to each other. This is a notion that concerns many Malaysians, who view the company with great patriotism.

“Malaysia Airlines is such a good face for Malaysia to the world,” says 23-year-old student Fatin Badjuri, waiting for her flight at Kuala Lumpur International, ranked as one of the region’s best airports. “I’m worried about the problems these incidents will cause to the company, as well as to the country. I feel people may start thinking negatively about Malaysia now.”

Among the staff at Malaysia Airlines, though, all public concern remains focused on the recent tragedy. The airline released the full list of passengers aboard MH17 on Saturday.

“The entire cabin crew population is mourning … we’re not really concerned with the financial qualms right now,” said Ismail, the air carrier’s union leader, at a separate press conference on Saturday. “The spirit is demoralized. Some have not been able to come to work. The question we ask is if this mass murder was done with the intention to kill everyone on the flight.”

Malaysia is craving answers, and fast. Their patience has been sufficiently tried over the past few months. 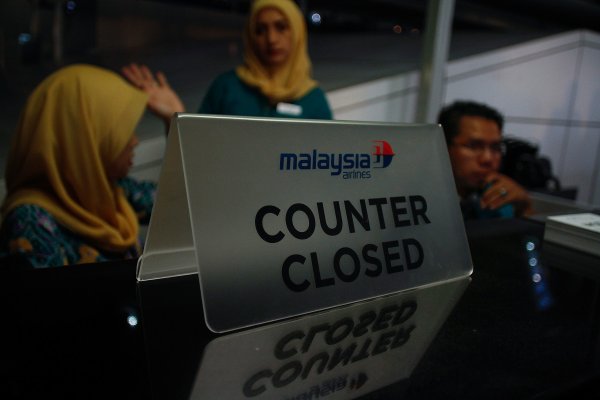 No Mayday Call
Next Up: Editor's Pick