10 of the Most Under-Appreciated Professions

Your job may not be as thankless as you think it is—at least maybe not when you compare it to this list. All of these professions have one thing in common: no one usually notices them until something goes wrong.

According to a new book by David Zweig, Invisibles: The Power of Anonymous Work in an Age of Relentless Self-Promotion, the most successful people with these careers share three common traits: “ambivalence toward recognition,” “meticulousness,” and “savoring of responsibility.” In other words, people who do these jobs well don’t care that you don’t know their names because they take pride in their work being done well. What a concept.

Thanks to their shared ambivalence, here are 10 under-appreciated professions that you might never have heard of:

Have you ever taken note of the impressive signage at an airport? Probably not because when “wayfinders” do their job well, you’re able to arrive at the baggage claim or arrivals terminal seamlessly thanks to their system of signs, which are each designed with a specific color, font, or shape in mind to help you arrive at your destination.

The Academy Awards gives out an Oscar for outstanding cinematography, but you probably used that part of the show as your snack break. Also known as the “Director of Photography” or “DP,” cinematographers are in charge of lighting the sets of movies and television series. The precision needed to do it well requires a meticulous and intelligent mind—as long as it belongs to a person who doesn’t mind staying out of the director’s spotlight.

People don’t usually pick up their Chanel No. 5 and wonder who calibrated the exact combination of ingredients needed to create that scent. However, that is the work of perfumers, or “noses” as they’re known in their industry. They work tirelessly to ensure that the fragrance matches the brand, and the more invisible they are, the more credit (and money) the brand receives.

Most people have never heard of Dennis Poon, but by 2020, he will have designed the structure for ten of the twenty tallest buildings in the world. Poon is a structural engineer, which means that his meticulous work allows a building to stand. While most of the credit for a building’s structure (if any is doled out) goes to the architect, Poon is more than happy to stay in the shadows.

Pete Clements, known as Plank, makes possible the sound magic of the world-famous band Radiohead as their chief guitar technician. Fans do not often consider the man behind the English rock band’s many effects pedals for their three guitars, but they certainly would if even one step was missed, which could throw off the entire sound system. Luckily, Plank takes much pride in his invisible work and does it well.

Possibly the most famous (infamous, actually) interpreter to date was Thamsanqa Jantjie, who attracted global negative attention after he fake-signed Nelson Mandela’s memorial service. That’s because when simultaneous interpreters, such as the UN’s Giulia Wilkins Ary, do their job well, they slip entirely below the radar. However, without Wikins Ary and her colleagues’ work, which research has shown to be one of the most grueling tasks a mind can take on, very little could get done at the international headquarters.

The importance of this profession made national headlines in 2000, when the poor design of Florida’s presidential ballot confused voters and likely cost Al Gore the election. Theresa LePore, who created the misleading ballot, received hate mail and death threats, but she also brought attention to the silent art and brilliance of many successful graphic designers.

While more people have heard of anesthesiologists, Dr. Joseph Meltzer of UCLA points out in Invisibles that they often aren’t the ones receiving the “fruit baskets” when a surgery goes particularly well. “It’s funny how on TV the surgeon is the leader of the OR, but in reality, during an emergency they’re often the ones freaking out, looking to me for assurance,” said Dr. Albert Scarmato of New Jersey. To excel in this field, one must epitomize the first of the three traits: ambivalence toward recognition.

The role of the understudy got somewhat of a bad rap from the 1950 movie All About Eve, in which Eve Harrington schemes her way from understudy to lead actress. Zweig shows how understudies can take pride in being a part of a production, regardless of whether they ever step in front of the audience. But acting and the understudy’s lack of recognition seem directly at odds, which is why award-winning actor and director Ray Vitta said, “It’s not for the faint of heart.”

Did you think that celebrities like Serena Williams or Ed Koch wrote their own books? Although they are often largely assisted by talented ghost writers, it is often just the star’s name that appears on the cover. “To me it doesn’t matter,” said ghost writer Daniel Paisner. “It’s the joy of the work and the accomplishment that rewards me.” And I’m sure Serena and Ed are grateful for that, too.

You can read more from Zweig here. 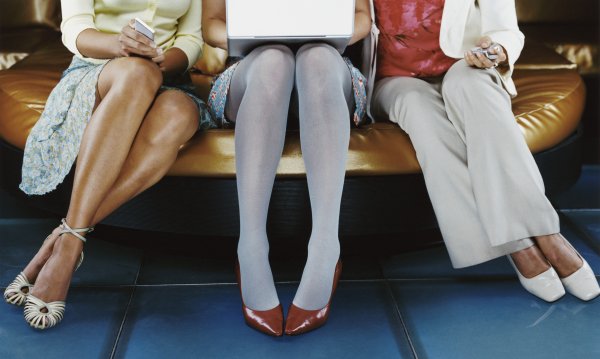 Why It's Hard for Women to Promote Other Women
Next Up: Editor's Pick