From the harrowing eyewitness accounts emerging from the Ukrainian countryside where Malaysia Airlines Flight 17 went down, it seems hard to imagine that victims’ relatives would find any comfort among the scattered belongings and ripped clothing of their loved ones.

But perhaps it is preferable to a life in stasis at a sterile business hotel on the fringes of Amsterdam’s Schiphol Airport. It is here that many relatives of the 298 people who died when the jet was apparently shot out of the sky have gathered, waiting for scant detail to seep out of Ukraine.

It is difficult to gauge the wishes of the relatives themselves: police keep a strict security cordon around the hotel to shield their grieving from the world. “Nobody can imagine what it means to them,” says Malaysia Airlines executive Huib Gorter. Gorter is convinced, however, that getting the relatives closer to the scene of tragedy will help bring some closure.

“There is a strong need from the next of kin who want to be there, so we are working on that as we speak,” he tells reporters. He admits the logistical hurdles are enormous: the crash site is about 500 km from Kiev, the capital of Ukraine, and the journey by road is a long one over difficult terrain. Then there are the rebel checkpoints, and the lack of facilities in an area gripped by a separatist uprising.

For now, the Ukrainian government is not even giving the airline permission to bring the relatives to Kiev, though a spokesperson at the Malaysia Airlines media center in Kuala Lumpur said they were in talks with the authorities. But the Dutch government agrees with Ukraine’s cautious stance. “The Ministry of Foreign affairs advised against it because its simply too dangerous for people to go there,” says Edmond Messchaert, a Dutch Ministry of Justice press officer. “This will probably take place at some later stage.”

So the relatives remain in isolation at the airport hotel, having to bear the painstakingly slow progress as investigation teams try and establish who shot down the packed jet. What Dutch Prime Minister Mark Rutte has promised them is justice. At least 189 of the victims were Dutch, a huge loss to a country of 16 million people. Flags flew at half-mast Friday as the nation tried to process the tragedy.

“Let me make one thing clear — we want to get to the bottom of this tragedy,” Rutte said. “And if it becomes clear that the aircraft was attacked, I will personally make every effort to ensure that the perpetrators are found and punished. We will not rest until this is done. We owe that to the innocent victims and their next of kin.”

Dutch politicians have insisted that their team must have full access to the crash site, and many demanded a thorough and independent investigation into the causes. A team from the Dutch Safety Board headed to Kiev on Friday along with forensic experts who will start the process of identifying the dead.

“The Dutch people need to know the truth, therefore we need to have these teams in place … as soon as we can,” said Messchaert.

Also on Friday evening, a Malaysia Airlines plane carrying Malaysian military officials and forensic experts is expected to arrive in Kiev, as a multinational investigation team begins to form and start its work. That plane will then carry on to Amsterdam’s Schiphol Airport with a group of volunteers.

That plane may eventually be allowed to return to Kiev carrying the relatives closer to their loved ones, but for now, some are seeking comfort elsewhere. Floral tributes have started to build up along the wall outside Schiphol’s departures hall. “The world is in shock. This should never have happened,” reads one notice tacked to a bouquet.

And that is what 50-year-old bus driver Sheoratan Pradiep is pondering as he glances down at the tributes: How can his sister-in-law’s nephew have been killed so suddenly by a missile fired from country he knew so little about?

“I didn’t realize that it was a big conflict over there, so when I heard about the plane crash and the cause of it, I was shocked,” he says, explaining that the young man was heading to Malaysia on honeymoon with his new wife. “It’s very terrible … I hear from the news that the plane was shot down, and the people blame each other, so I don’t know what is true.” 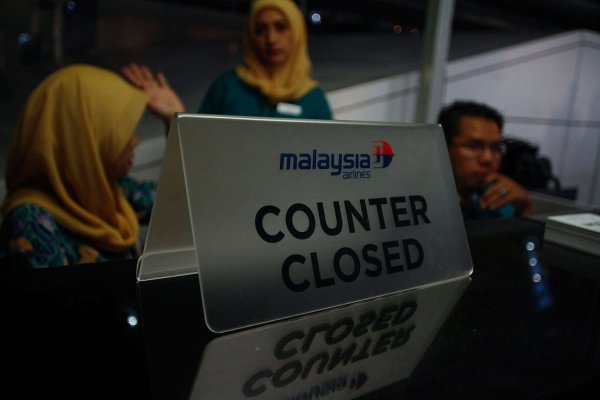 After the MH17 Ukraine Crash, Malaysians Face Another Catastrophe
Next Up: Editor's Pick