After the MH17 Ukraine Crash, Malaysians Face Another Catastrophe

Two Malaysia Airlines flight attendants embrace at Kuala Lumpur International Airport. They hold on to each other for a moment, then wipe their tears and straighten their light-blue, flowered dresses. Today, these uniforms signal so much more than an employment at an airline. They declare community—a message as important as any, in this time of sorrow and anger.

Malaysia is in a state of shock. Only four months have passed since MH flight 370 vanished into thin air on its way from Kuala Lumpur to Beijing. Now, the unthinkable has happened again. MH17, heading from Amsterdam to Kuala Lumpur, exploded in midair, scattering charred aircraft and body parts over a vast field in an embattled province in eastern Ukraine.

Once again, crisis groups have been assembled in the Malaysian capital of Kuala Lumpur, grieving relatives gathered, press conferences held. On Friday evening, a ”rescue” team including forensic experts and a group of Malaysia Airlines volunteers boarded a private plane to Kiev to partake in the investigation on the ground—an investigation that, because of conflict on the ground in Ukraine, may prove all but impossible. Yet back home, Malaysian feel stuck in a state of ghastly déjà vu.

”We haven’t collected ourselves yet from flight 370,” a pilot at Malaysia Airlines who wishes to stay unnamed tells TIME. He says that he flew on several occasions with the co-pilot on MH370, but didn’t know anybody in the crew personally this time. Yet, it was with a heavy heart he came to work this morning. ”None of us said anything to each other, but we didn’t have to. We knew. Right now, I have very mixed emotions. Sadness and anger. How can something like this happen in 2014? You can’t just shoot down a plane!”

Although it’s not yet been confirmed how MH17 crashed, most early opinions—including from defense officials in Washington—point to a ground-to-air missile strike. Pro-Russian rebels have recently been bragging about their seizure of missile systems that would be capable of hitting planes flying at high altitude, and which may have been used against Ukrainian cargo planes that were downed over the past week.

But while basic questions about the crash are still unresolved, relatives of passengers on MH17 face none of the agonizing uncertainty that surrounded the fate of MH370’s victims. Graphic of that debris-strewn field in Ukraine have seen to that. ”My cousins knew when they saw the reports on CNN,” says Johari Redzuan at Marriott Hotel in Kuala Lumpur, where the bereaved relatives have been gathered. “They were in constant touch with their sister ahead of her trip, so they knew exactly what flight she was on. They were all looking so much forward to it.”

Redzuan’s late cousin hadn’t been home for five years, but now they were planning to celebrate Eid-ul Fitr, the end of Ramadan, together for the first time since she moved to Geneva, over 40 years ago.

“You would think that we would be raging because someone killed our relatives, but we’re not,” says Redzuan, trying to explain the surprising calm of many relatives at the Marriott. ”Maybe it has to do with our fasting, but there’s really a feeling of togetherness here at the hotel. When the Deputy Prime Minister came here to talk to us, we joined together in prayer for the rescue team in Ukraine. They have to travel through such dangerous terrain to get to the crash site.”

Redzuan admits that he’s still in shock, and that the crying goes on intermittently upstairs in their rooms, with every call or discussion leading back to memories of their departed sister or cousin. Yet, they’re licensed to grieve, with a certainty that relatives of MH370 victims never had. In that, at least, they can find comfort, gratitude and unity. 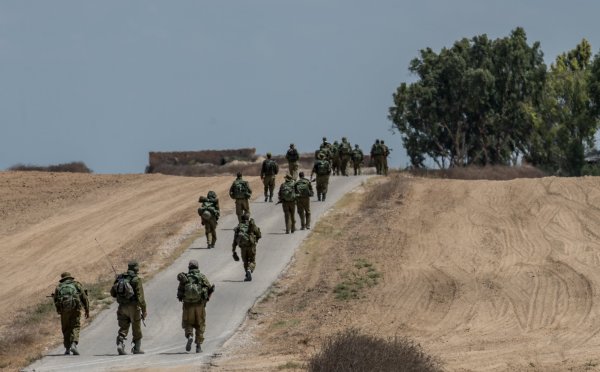 Gaza Invasion Could Last Months
Next Up: Editor's Pick