Elderly men talk to each other as they take a break at a boarding school that cares for the elderly during Ramadan in Central Java, Indonesia on July 15, 2014.
Ulet Ifansasti—Getty Images
By Sohaib N. Sultan

In Muslim societies just about everywhere there is a lot of call and cry for unity these days in every sector of society – from the street vendors in the marketplace to the religious preachers on the pulpit. This phenomenon is quite understandable as many Muslims are experiencing crises after crises of political instability, wars, and other forms of strife. Even Muslims who are living in relatively stable and safe contexts experience these crises second hand through news outlets, social media, and reports from family and friends. The proposed solution out of this messy cycle always seems to be unity – only if Muslims would work together and not against each other we would solve all our problems, so goes the argument.

But, too often the problem with these calls for unity is that they – consciously or subconsciously – come with the expectation of uniformity. When religious folks are asked how unity can be gained in their estimation, the most likely answer will be, “by following the Qur’an and Sunnah [prophetic traditions].” Well, that sounds great until you address the million-dollar question – whose understanding and interpretation of Qur’an and Sunnah?

You see, from the very early period of Islamic history, Muslims figured out the hard way that people by their nature tend to disagree and these disagreements can even lead to violence between the most well-intentioned people. So, as Islamic thought and civilization matured there was a calming embrace of pluralism among Muslims so that just in Sunni Islam, for example, there came to be the formation of and tolerance for at least four schools of practice and at least two schools of theology and several schools of spiritual attainment. These schools learned to live side-by-side with tension, yes, but also mutual respect. An entire scholarly discourse was created on the ethics of disagreement to help keep the peace. The more successful Muslim empires figured out institutionalized systems to allow different schools to coexist in society.

But, with the collapse of Islam’s last empire after World War I much of the Muslim World descended into a state of chaos and internal tensions began exploding out of control. The longing since then of many Muslims has been a return to a romanticized past when Muslims were largely united under one or more empires. The popular memory of this period was that Muslims were the leaders of the world when they were united in this way, and now they are a humiliated and easily trampled upon people. This sentiment for reunification and bringing back the glory days is what has, partly, given rise to rather silly but dangerous groups that insist on a single understanding of Islam.

Muslims need to seriously reevaluate and reconsider the whole notion of what unity means and entails for our age. If it means uniformity then we will continue down a long and difficult road. But, if we can re-envision a unity for our times that does not insist on absolute uniformity and conformity then there may be reason for hope.

Ramadan is a marvelous season for us to imagine what this different type of unity might look like. In this month Muslims of different persuasions find a way, more often than in any other month, to break bread together, pray together, laugh and cry together. The act of sitting together over a meal or praying shoulder-to-shoulder or exchanging stories in an intimate setting is what breaks the cycle of mistrust and misunderstandings.

As the Muslim chaplain at Princeton University, I have witnessed this firsthand. Our breaking of the fast table every evening looks like a gathering of the United Nations. South and Central Asians, Africans, Europeans, and Americans enjoy each other’s company with some meeting each other for the very first time. Sunnis and Shias and Sufis pray together before sharing a meal. The insistence is not on uniformity, it is on friendship.

As such, I would like to suggest that we as a community move from a desire for unity to a desire for togetherness – a state of being close to one another as opposed to a state of being necessarily joined together as a whole under a single school of thought or organization. The togetherness model requires a strong civil society that is bottom up rather than an enforced uniformity that is top down.

As the Qur’an beautifully says, “O humankind, We created you from a male and a female, and We made you races and tribes for you to get to know each other…” (49:13). Getting to “know each other” is what is at the heart of the togetherness ethos. Muslim commentators and sages have explained that this means, at its deepest and most desired level, an intimate friendship and love between people who are different. When our sense of relationship is based on friendship and closeness in the togetherness paradigm, then fear mongering and hatred and discord – all of which we have come to hate – can and will be overcome.

So, here’s hoping and praying that just as this month of Ramadan has brought so many together, that we can find a way to embrace togetherness as our ethos for moving forward. 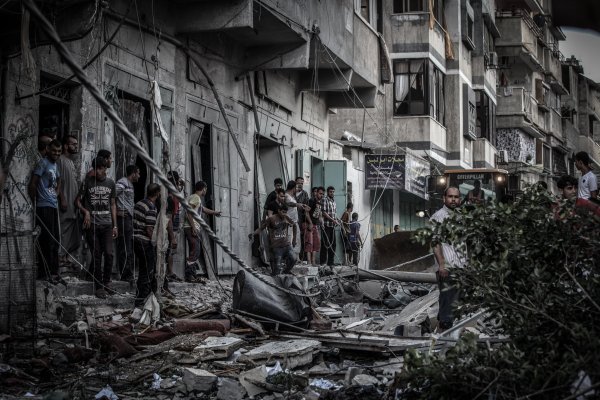 Ramadan, Day 22: A Prayer for Palestine
Next Up: Editor's Pick