A Palestinian family who fled their homes is en route to seek shelter in a UN school in Khan Younis, central Gaza Strip, 18 July 18, 2014.
Oliver Weiken—EPA
By Mirren Gidda

Israel’s ground offensive in Gaza increased Friday with the use of tanks, artillery and gunboats, Reuters reports. Israeli Prime Minister Benjamin Netanyahu said that he was prepared to “significantly widen” the ground offensive against Palestinian militants in the area.

Thousands of Israeli troops, preceded by six tanks, entered parts of Gaza around 10 p.m. local time Thursday. Many Palestinians had already fled towards the center of Gaza, having been warned of the invasion by Israeli leaflets and automated phone messages.

By Friday, Palestinian health officials said 27 Palestinians, including three children, had been killed in the offensive. The Israeli Defense Forces (IDF) reported a loss of one soldier.

“Last night our forces began a ground operation to hit the terror tunnels crossing from Gaza into Israel’s territory,” Netanyahu told his cabinet in a special live broadcast Friday. “It is not possible to deal with the tunnels only from the air … My instructions … are to prepare for the possibility of significantly widening the ground operation.”

Hamas responded to Israel’s offensive by firing mortars at Israeli troops and launching rockets into the southern Israeli towns of Ashdod and Ashkelon.

Israel launched the ground offensive after Palestinian militants fired over 100 rockets into Israel at the close of a five-hour humanitarian cease-fire. The militants had also reportedly fired three mortars into Israel during the cease-fire. The Gaza invasion follows a 10-day conflict with Palestinian militants that saw 1,380 rockets launched at Israel, Israel claims. The IDF responded with aerial and sea bombardments, including an attack that took the lives of several Palestinian boys playing on a beach.

It is not yet clear whether Israel will indeed expand its ground operations, which currently span the 36-mile Israel-Gaza border. So far, the Israeli military has primarily focused on seeking out tunnels Israel says are used by Palestinian militants to cross into the country. The IDF claimed Thursday it had repulsed 13 gunmen, alleged to be from Hamas, who emerged from a tunnel near a farming community in Israel.

Amid news that Israel is calling up 18,000 reservists to add to its 30,000 mobilized troops, a Hamas spokesperson said: “The ground invasion doesn’t frighten us, and the occupation army will sink in Gaza’s mud.”

Since the most recent conflict between Israel and Hamas began on July 8, Gaza officials say 258 Palestinians, most of them civilians, have been killed. A further 2,000 have been wounded. Israel has reported the death of a civilian in addition to the solider killed in the Gaza offensive. 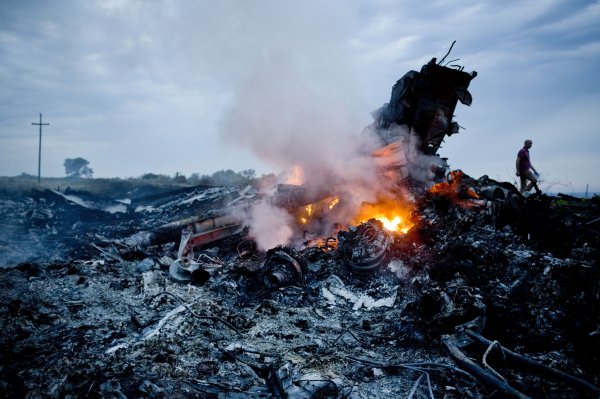 2 Dogs Aboard Airplane
Next Up: Editor's Pick