At a press conference in Kuala Lumpur on Friday afternoon local time, Malaysian Transport Minister Liow Tiong Lai denied that Malaysia Airlines had shirked security warnings and approved Flight 17’s taking of a shorter route from Amsterdam over conflict zones in Eastern Europe in order to save time and fuel.

“This was an approved route, and approved routes are safe routes,” he said, adding that 15 of 16 international air carriers from the Asia-Pacific region rely on the flight path over Ukraine, where the Kuala Lumpur–bound Boeing 777 was purportedly shot down by pro-Russian insurgents on Thursday evening.

In the aftermath of the disaster, however, Malaysia Airlines has rerouted its Europe-to-Malaysia flights over the Middle East and India, according to maps provided by FlightAware.com. A flight that departed for Kuala Lumpur from Paris’ Charles De Gaulle Airport shortly before news of the crash broke appears to have been quickly diverted southward while crossing Poland.

The pilots of the doomed airliner, however, had no foresight of the risks, Liow said. He insisted that “no last-minute instructions” had been given to Flight 17’s crew, and dispelled rumors that ground controllers had received a mayday call from the cockpit of Flight 17 prior to its crashing in a rural area of eastern Ukraine.

He also provided an updated passenger manifest; at press time, the identities of only 20 of the 298 passengers had yet to be accounted for. It was learned earlier in the day that the step-grandmother of Malaysian Prime Minister Najib Razak may be among the deceased, and that a number of those onboard — maybe as many as a hundred, according to some reports — were AIDS researchers, health workers and activists en route to the 20th International AIDS Conference in Melbourne, Australia.

Over the course of a hectic press day, Malaysian officials skirted around the issue of culpability, choosing instead to address to emotional magnitude of the tragedy and exonerate state agencies and Malaysia Airlines from any potential wrongdoing. The governments of both the Ukraine and the U.S., however, insist that a Russian-made antiaircraft missile fired by pro-Russia separatists had felled the aircraft from the sky, though it remains unclear whether it was an errant mistake or a deliberate act of terrorism, as Ukrainian President Petro Poroshenko has insisted. 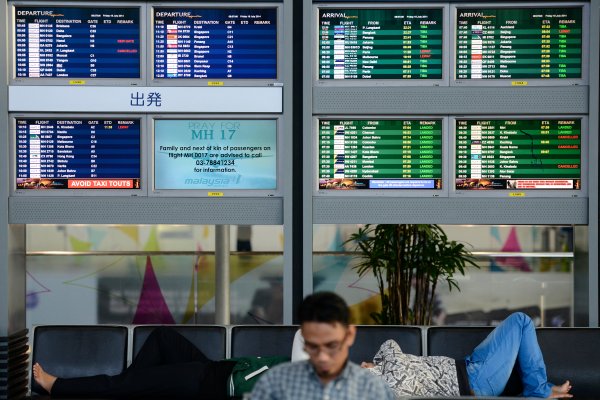 Agony, Disbelief in Malaysia
Next Up: Editor's Pick