McCain: Iraq War Might Not Have Happened Had I Won In 2000

Arizona Sen. John McCain, once one of the most ardent defenders of American involvement in Iraq, said Thursday that had he been President in 2003 the U.S. might never have invaded.

“You’ll find this surprising,” McCain said at an event hosted by CNN and National Journal Thursday in Washington, “but I think I would have been more reluctant to commit American troops.”

The 2008 Republican presidential nominee and one of the chief proponents of the Iraq surge argued that his background in the military and his experience in Washington would have led him to see through “flimsy” evidence, had he defeated former President George W. Bush in the 2000 Republican primaries.

“The guy named Curveball that we were relying on turned out to be some guy in a German prison that was an alcoholic,” McCain continued. “On the evidence—I think I would have challenged the evidence with greater scrutiny.

But McCain added that he was not blaming the Republican President for his handling the run-up to the war, which polarized the nation and cost more than 4,400 American and tens of thousands of Iraqi lives. “I’m not blaming President George W. Bush. It’s not for me to critique my predecessors, especially those that I lost to,” he said.

Interviewed by CNN’s Jake Tapper and National Journal’s Ron Fournier, McCain said he relied on the credibility of former Secretary of State Colin Powell for his vote in favor of the war.

“In Iraq in 2003, the Secretary of State, one of the most respected men in America, went to the United Nations Security Council and alleged that Saddam Hussein had weapons of mass destruction,” McCain said. “If I was presented with that same evidence today, I would vote the same way. I respected and trusted the Secretary of State Colin Powell. It’s obvious now that Saddam Hussein, though he had used weapons of mass destruction, did not have the inventory that we seemed to have evidence, that looking through with some hindsight was very flimsy.” 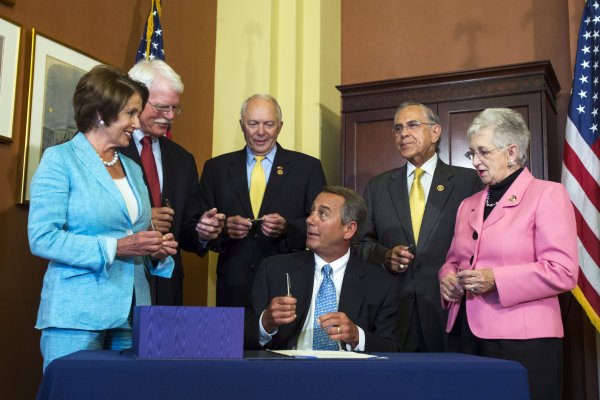 Compromise Disrupts the Daily Vitriol in Washington, D.C.
Next Up: Editor's Pick