The relatives started arriving at Schiphol Airport as the sun began to set on a warm Amsterdam evening. They gathered briefly, bewildered, at a bar area inside the departure hall before police ushered them onto airport shuttle buses to an undisclosed location in the airport, where they would start their anguished wait for news of family members they feared lost on Flight MH17.

Some of the men and women were tearful and clung to each other; most looked shell-shocked, staring blankly ahead as the buses pulled out, seemingly unable to process news of a tragedy apparently caused by a conflict so far away. Dutch reporters who arrived at the scene early said there were scenes of confusion when the first relatives arrived, unsure of where to go and asking passers-by for help.

Airport officials were also initially at a loss to direct the television crews and journalists who came from all over the world, with a press conference delayed by hours. When a Malaysia Airlines executive and an airport official finally appeared to talk to the media, they offered words of comfort for relatives, but little information about the cause of a crash deep in a conflict zone in Ukraine.

“Our main priority is to look after people who are suffering at the moment,” said Huib Gorter, senior vice president for Europe for Malaysia Airlines. “You cannot imagine what has happened to these people … All our manpower is dedicated to helping them.”

A full passenger list of the 298 people aboard the Malaysia Airlines Boeing 777 was not released, but a gasp went up from the Dutch press when Gorter announced that 154 people from the Netherlands were on board. There were also 27 from Australia, 43 from Malaysia (including crew and two infants), 12 from Indonesia (including another infant) and others from Europe, the Philippines and Canada, according to a statement posted Thursday by Malaysia Airlines.

For those relatives who wish to travel closer to the site of the tragedy, a flight will be provided to Kiev, possibly departing tomorrow. But Gorter also spoke about the difficulty in reaching the crash site, which is about seven or eight hours by road from the Ukrainian capital. Asked if it was safe for the plane to be flying over a war zone, he said: “It is classified as a safe area to fly over, otherwise in our industry we would not be able to file a flight plan over an area that is dangerous.”

The Ministry of Foreign Affairs set up a helpline for friends and relatives, while the Dutch airliner KLM – which was on a code-share agreement with the Kuala Lumpur–bound flights – announced they were suspending flights over Ukraine “as a precautionary measure.” Air France and Lufthansa have also both suspended flights through Ukrainian air space.

Joss Wibisono, an Indonesian journalist and author based in Amsterdam, says his aunt, Jane Adi Soetjipto, 73, was among the passengers who died aboard flight MH17. “Every year Aunt Jane visited the Netherlands to see her mom” and other family members, says Wibisono.

Wibisono and his extended family are Indonesian immigrants who have lived in the Netherlands for decades. On Wednesday morning, the family took Soetjipto and her friend to Schiphol Airport: “She flew back to her home country [Indonesia] with her close friend, Aunt Gerda Lahenda,” Wibisono says, adding his aunt’s seat was 14A and her friend’s 14C. Both women had been in the Netherlands since April.

In the late afternoon when Wibisono was preparing to watch Tour de France, he saw a news announcement on TV about the Malaysia Airlines plane that had been downed in eastern Ukraine. “I immediately knew it was Aunt Jane’s flight,” he tells TIME. He contacted her family in Jakarta and also called Soetjipto’s sister who lives in a small town in southeast Holland. “They didn’t know, and became hysterical,” Wibisono says. “I am very shocked. I couldn’t sleep.”

The Dutch Prime Minister, Mark Rutte, flew back from a European Union summit in Brussels, saying he was “deeply shocked by the dramatic reports on the crash.” His Justice and Security Minister, Ivo Opstelten, said there were “victims from many countries.” On Friday morning, Rutte called for an investigation into the crash that killed mostly Dutch passengers. “The next of kin of the 154 Dutch victims and all the other nationalities have the right to know what happened,” Rutte said, according to the Associated Press.

“The images that you and I have seen are of course terrible,” he was quoted as saying by Dutch newspaper Volkskrant. “I am aware that this investigation cannot go fast enough, but everyone at this time is doing everything possible to inform family and friends.”

Germany has called for an independent investigation into the cause of the crash. “The separatists must immediately grant emergency and security services access to the crash site and an independent, international investigation must commence immediately,” Foreign Minister Frank-Walter Steinmeier said. “I’m horrified … with hundreds of completely innocent people having died in this terrible way, words fail you.” 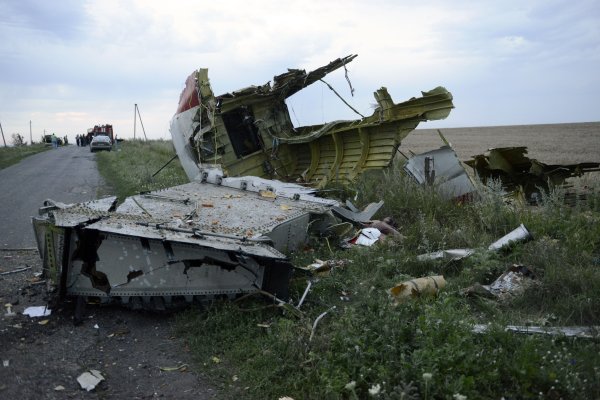 Why Was MH17 Over Eastern Ukraine?
Next Up: Editor's Pick