Former Missouri Congressman Todd Akin went on MSNBC Thursday morning to try to explain his much-maligned comments from 2012 in which he said abortions wouldn’t be necessary for rape victims. “If it’s legitimate rape, the female body has ways to try to shut the whole thing down,” he told a St. Louis TV station in 2012.

Akin was on MSNBC to promote his new book, Firing Back, but he also took it as an opportunity to explain his earlier flub. “Legitimate rape is a law enforcement term, it’s an abbreviation for ‘legitimate case of rape,'” he told Chuck Todd. “A woman calls a police station, the police investigate, she says ‘I’ve been raped,’ they investigate that. So before any of the facts are in, they call it a legitimate case of rape,” explained Aiken.

But is ‘”legitimate rape” really a law enforcement term? We asked some experts.

“I’ve taught police officers, and worked with police officers on every continent in the world, and that’s something I’ve never heard in my 50 years in law enforcement,” says Dr. James A. Williams, former Chief of Organized Crime Drug Enforcement Task Forces for the U.S Department of Justice, who also worked in municipal law enforcement in New Jersey. “I’ve never heard of that. Never.”

Nonetheless, Akin believes that everyone took what he said out of context. “This was intentionally misunderstood and twisted for political purposes. It doesn’t make any sense to say ‘a conservative is saying that rape is legitimate,’ that doesn’t even add up.”

But the real problem isn’t that people think conservatives are pro-rape, it’s that Akin’s comment sounds like victim-blaming. By calling some rapes “legitimate,” he is (perhaps unintentionally) implying that some aren’t. And that has lead his critics to say that Aikin wants to make sure that a woman’s claim of rape is “legitimate” and that they aren’t just making it up to get a free abortion or something.

Once the topic of abortion came up, the interview took an even more controversial turn. When asked point-blank whether rape victims should be allowed to have abortions if they get pregnant, Akin turned it around. “Should the child conceived in rape have the same right to live as a child conceived in love?” he said. “I had a number of people in my campaign that were children…who were conceived in rape.” That assertion was not immediately verifiable.

Chuck Todd (rightly) pointed out that if Akin had staffers who were conceived from rape, then wouldn’t that disprove his theory that women can “shut that whole thing down?” Yes, according to logic, but all Akin had to say was: “I believe that little children are special.” 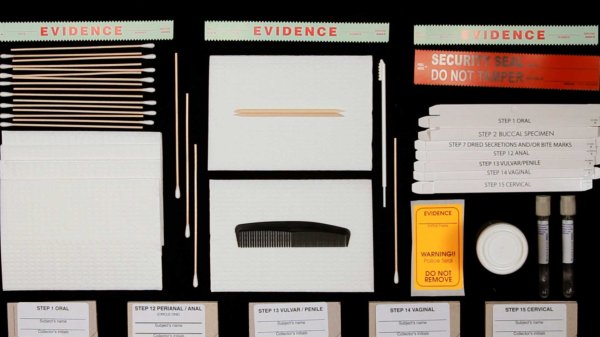 Here's What Happens When You Get a Rape Kit Exam
Next Up: Editor's Pick