Israeli security forces stand next to damage caused by Katyusha style rocket fired from Lebanon near the border between northern Israel and Lebanon, on July 11, 2014.
JINI/Xinhua Press/Corbis
By Aryn Baker

Israel has a lot of enemies in the region, so it’s not surprising that it is taking fire from multiple sides—including from southern Lebanon, the source of at least four missile launches into northern Israel in recent days. What is surprising is that none of those attacks originated from Israel’s archenemy Hizballah, the powerful Lebanese militia that dominates the country’s south.

Some 11 rockets landed in Israeli territory. No one was hurt. At least two failed to launch, according to Lebanese military accounts quoted in Lebanon’s Daily Star newspaper, and one never made it into Israel. Not far from the United Nations-monitored Blue Line that demarcates the border between Lebanon and Israel, Lebanese bomb defusers. were able to dismantle two other rockets before they could be launched. All in all, the rocket attacks appear to be the work of amateurs driven to action by the Israeli attacks on Gaza, says Lebanese political analyst Kamel Wazne, and not that of an organized militant group. “If Hizballah decided to launch a war on Israel, well, Israel already knows what that looks like,” he says. (Hizballah has not commented on the attacks.)

On Wednesday July 16, the Lebanese military announced that it had apprehended two Palestinian brothers who had admitted to launching one of the attacks, as well as a Lebanese man who was implicated in the first rocket volley on Friday. Since the attacks started Friday, the Lebanese army has engaged in a concerted effort to prevent any further cross-border attacks by increasing patrols in the area and reaching out to the U.N. peacekeepers that have been in place in south Lebanon since the 2006 war between Israel and Hizballah. Lebanon, including Hizballah, does not want to see another war with Israel, says Wazne. “There is a consensus in Lebanon that no missiles should be launched from Lebanese territory, and that these acts do not serve the Lebanese interest or the Palestinian cause.”

One of the three detained men appears to be affiliated with a radical Lebanese group, al-Jamaa al-Islamiya that has gained ground among Lebanese Sunni militants aligned with rebels fighting the forces of Syrian President Bashar Assad. Hizballah, in turn, backs Assad. The attackers, say Wazne, could have been motivated by a desire to deflect Israeli attention away from Gaza and towards Hizballah in an effort undermine the group’s support for Assad. Meanwhile Hamas, the Palestinian militant group battling Israel from Gaza, has also claimed responsibility for an attack from Lebanon, but it is not clear that it could have achieved such a feat, considering its limited presence on the ground.

All of which begs the question: why isn’t Hizballah getting involved in the Gaza conflict, which intensified on July 17 as Israel announced a ground invasion of the enclave? For a militant group whose leader, Hassan Nasrallah, uses every opportunity to decry what he calls Israel’s illegal occupation of Palestine, Hizballah has been remarkably quiet since Israel launched its operation in Gaza a week ago. Hizballah’s standard rhetoric is that it is always ready for another confrontation with Israel, but it is just as likely that the militant group is keeping a low profile in order to better focus its efforts on Syria.

It’s not that Hizballah couldn’t handle two fronts at once, says Wazne, who has close contacts in Hizballah’s leadership. He believes the group is keeping a close eye on the events in Gaza, but as long as Israel does not attack Lebanon, it sees no need to get involved. The real risk, he cautions, is if Israel overreacts to the missiles being lobbed over the Lebanese border. Israel has met every incoming rocket with a barrage of its own into south Lebanon, but so far there has been no casualties or damages on either side. Lebanese Foreign Affairs minister Gebran Bassil threatened to lodge a complaint with the U.N. Security Council over Israel’s excessive response against Lebanon. “Someone is trying to use Lebanon as a launching pad to respond to Israel over events in Gaza. This is not the policy of the state, and it is taking measures against these sporadic groups.” he told reporters Tuesday. “But that doesn’t mean Israel can attack Lebanon.”

If it does, notes Wazne, Hizballah will be ready. 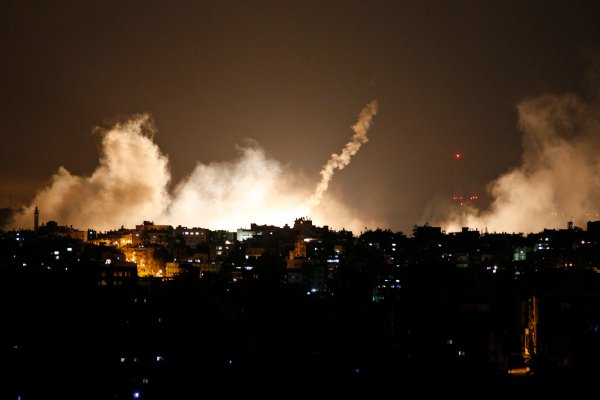