Muslims pray before breaking of the fast during Ramadan on July 13, 2014 in Surabaya, Indonesia.
Robertus Pudyanto—Getty Images
By Sohaib N. Sultan

There is probably no time when Muslims pray as much as they do during the blessed month of Ramadan. This is saying a lot for folks who pray five times a day as part of their daily schedule. Every night, throughout Muslims lands and wherever Muslims live, the Mosques are filled with devout and able worshipers who spend at least a portion of their usual sleeping hours to turn to God, attempting to reap all the blessings they can from the holy month. As the month comes to a close, this worship becomes more intense.

Prayer in the Islamic tradition is a prescribed ritual with set times and motions. The life of prayer is given such importance that when the Prophet Muhammad was on his deathbed, one of the last pieces of advice for his community was, “Prayer, prayer, prayer.” The Prophet also described prayer as “the key to paradise.” One of the most common prescriptions for believers in the Qur’an is to institute and be constant in prayer.

Yet, the challenge with prayer is that it can easily become routine and unfocused when it is taken as mere ritual without proper contemplation. In reality, every step of the Muslim prayer – from preparing to pray to concluding the prayer – is full of rich meanings that bring the ritual to life.

A Muslim prepares for his or her prayer with a pre-ritual washing that is meant as much for approaching God in a physically clean state as it is a means for spiritual purification. The washing involves washing the hands, rinsing the mouth, sniffing water up the nose canal, washing the face, washing the arms up to the elbows, wiping the head and neck and ears with wet hands and, finally, washing the feet up to the ankles. Sounds complicated, but it’s easy to get the hang of it after a while. With every limb that is washed, there is spiritual purification and rejuvenation, with water acting as that very real and symbolic purifying agent for dirt and wrongdoings. The washing points to the importance of purifying one’s heart in the journey to God.

After the wash, a Muslim finds a quiet and clean space to pray and faces toward Mecca. Contrary to popular belief, Mecca is the direction of Muslim prayer, not because it is the birth place of the Prophet Muhammad, but rather because it connects worshippers to the ancient footsteps and path of Prophet Abraham – known as the spiritual forefather of the faithful – and his devout family. It is Abraham and his family’s monotheism, trust in God and willingness to sacrifice that led them to the barren deserted land of Mecca where God would bring forth a water spring from the earth for a desperate mother – Lady Hagar – and her babe – Prophet Ishmael – when they were seemingly abandoned and on the brink of losing all hope. This water spring became the source of life and community and an opportunity to impart monotheistic teachings. Years later, Abraham returns to visit his wife and son, and together they build a temple for the worship of God intended for all people (Qur’an 2:125—129). This turning to the ancient temple, known as the kabba, is an act of uniting people toward a common direction and purpose – celebrating the Oneness of God.

Facing the kabba, the Muslim then lifts his or her hands in an upward motion with palms facing outward. It is, among other things, an inauguration of the prayer and a symbolic act of taking everything of worldliness that is before them between their hands and putting it behind them as they turn their attention solely to God.

This is followed by a period of standing in which the opening chapter of the Qur’an and any other Qur’anic passage is recited – either silently or melodically. Standing is the first meditative posture of the prayer. In this posture the mind is over the heart as the words of the Qur’an are being deeply contemplated. Standing is also a preparation for the day of resurrection in which all will have to stand accountable before God.

After standing, the next meditative posture is bowing – a universal symbol of deep respect and honor – to the One most worthy of awe. In this posture, words of divine glorification are sung within the heart. The bowing is also meant to instill, even outside of prayer, a deep respect for the ever living presence of God in our lives, for “God is with you wherever you may be,” says the Qur’an (57:4). In this position, the heart and mind are aligned in their devotion.

After briefly moving back into the standing position, the devotee falls with a state of loving surrender into a state of prostration whereby their hands, knees, feet, forehead and nose are all laid on the earth. It is an act of complete devotion that is meant to instill a life of devotedness to the only One worthy of such dedication. In this position, the heart is over the mind as all doubts are overwhelmed with an inner peace. The worshiper briefly sits after prostration only to fall right back into prostration a second time – like a lover re-embracing their beloved after separation.

When this cycle of standing, bowing and prostrating has been completed at least twice, the devotee moves to the final part of the prayer – the meditative posture of calmly sitting. In this posture, a heavenly moment is recalled when the Prophet journeyed to the high heavens to visit all of the previous prophets and ultimately a special meeting with God. There the Prophet testified that there is “No god but God,” and God testified that “Muhammad is the servant and messenger of God.” The two testimonies join together to form the devout Muslim’s creed and consciousness. Peace is, then, sent upon all of the righteous servants, upon Muhammad and the followers of Muhammad, and upon Abraham and the followers of Abraham.

Finally, after receiving this peace from the Source of Peace, the Muslim turns his or her head to right and to the left, to the East and to the West, and prays in both directions: “May the peace and blessings of God be upon you.” Thus, the spiritual seeker is directed to spread peace and to be among the peacemakers. The prayer concludes with the worshipper embracing a profoundly ethical mission in the world.

In this way, prayer goes beyond mere ritual – it becomes the source of internal and external transformation, and the necessary component in living the life of a spiritually vibrant and ethically upright human being. 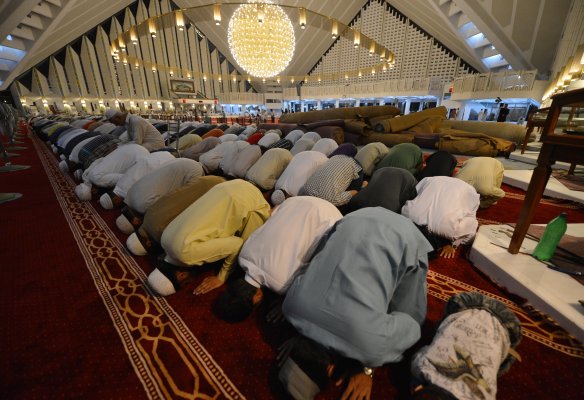 Ramadan, Day 20: The Night of Glory
Next Up: Editor's Pick