Much of the world’s information may now be saved in the virtual cloud, but the first data-storage systems were simple drawings like this:

. Humans have been using images to communicate for millennia, since long before written language existed. Emoji, the latest example of that pictorial impulse, have become such a critical part of our hyperconnected exchanges that they are emerging as a dialect all their own.

Named by combining the Japanese words for picture (e-) and character (moji), emoji are the alphanumeric-size graphics that tweeters, texters and emailers around the world are now using thousands of times every second. They are the

sent to say, Just whatever. The panda faces and winking ghosts may be easy fodder for Grandpa’s next screed about how kids are ruining the English language (

), but many scholars have come to see emoji as an important tool, helping restore the context that has been lost as in-person communication has given way to inboxes.

“It’s easy to write them off as just silly little smiley faces or thumbs-up,” says sociolinguist Ben Zimmer, the executive producer of Vocabulary.com. “But there’s an awful lot of people who are very interested in treating them seriously.”

Among them are academics, entrepreneurs and some of the world’s largest tech companies, who see big potential in these little icons. The Unicode Consortium–an organization that standardizes digital code so text can be exchanged no matter the device or language–coded roughly 250 emoji this summer, giving software giants a way to ensure that a sent from an iPhone shows up as a on a Samsung. A fan’s video of Beyoncé’s “Drunk in Love” that used emoji to narrate the lyrics (

) became such a viral hit that it prompted the star to sell emoji shirts. Others have gained online followings by using emoji to sum up famous movie quotes (“I see dead people”:

), as inspiration for ad campaigns or as material for puzzle apps. But that may just be the beginning.

Signs for the Times

The modern roots of emoji can be traced to a digital miscommunication. In 1982, the computer-science staff at Carnegie Mellon had taken to bantering on online discussion boards, but jokes often failed to translate. To prevent the long tirades that resulted from the misunderstandings, research professor Scott Fahlman suggested that sarcastic messages be labeled with a smiley sign like this :-) . It worked, and soon after came the displeased :-( , the winky ;-) and the embarrassed XD. Those rudimentary signals of emotion got an upgrade in 1999, when Shigetaka Kurita, a Japanese telecommunications planner, figured visual cues could improve communication on mobile phones. Inspired by Japanese comics and street signs, he sketched ideas that were soon brought to life, copied by other companies and transmitted all over Japan.

When Kurita drew the first emoji, only half of U.S. households had computers. Now the total number of words in all text messages sent every three months exceeds the word count of all books ever published, according to text-analytics firm Idibon. These rapid-fire communiqués lend themselves to the efficiency that visuals like

provide. In person, we can suss out what someone is really saying through a furrowed brow or nasal tone. Images help translate those cues for the digital world. “Emoticons and emoji provide this nice shorthand,” says Idibon’s Tyler Schnoebelen, who studied emoticons at Stanford. In a text, softening a declarative statement might take two long sentences–or a single

That electronic economy can pay real-life dividends, as Facebook engineers have discovered. Say someone puts up a photo of you that you find

), the odds of getting a response improve.

The team also found that people are more likely to use an image when the emotion it expresses is clear, so Facebook worked with University of California, Berkeley, psychologist Dacher Keltner and Pixar artist Matt Jones to develop a set of what they call stickers, based on descriptions of human expressions chronicled by Charles Darwin in 1872. Analyzing how the use of those emoji corresponded to life offline, Keltner found that the richer the array of emotions expressed, the happier and healthier users tended to be. They also turned up some national tendencies. Canadians, for instance, are much more likely to express sympathy (

)than Americans are. “The kind of emoji that you send on a regular basis really tell you something about your personal life and the kind of culture you live in,” Keltner says.

There is no standard catalog of emoji. Unicode can tell companies like Apple or Google that certain bits of code should show up as a smiley face, but it’s up to software manufacturers whether that is displayed like

. Countless apps provide other options. But the most familiar emoji are the set Apple included as a native feature in its 2011 system update, which started the emoji explosion in the U.S.

That’s the set that Fred Benenson, a data engineer at Kickstarter, used when organizing a complete retelling of Moby Dick through emoji. Added to the Library of Congress in 2013, Emoji Dick begins,

. As any Melville aficionado knows, that’s a rough equivalent of “Call me Ishmael.” But the fact that non-Melvillites would likely be confused highlights the limitations of emoji: while they may be obvious in some cases, the meaning of many is vague (see:

). Context can complicate even the simplest smiley face. And the roughly 1,500 emoji identified by Unicode are hardly a replacement for the 250,000-plus words in English or the variety of the real world. Standard emoji sets, for instance, aren’t ethnically diverse, filled with

. Apple has promised that more inclusive emoji are coming.

The difficulty of translating life into icons isn’t putting off businesses like the Noun Project, which aims to create a “visual dictionary,” eventually hosting an icon for every object, like a car wash (

). It currently boasts 60,000, used by customers ranging from ad agencies to doctors communicating with autistic patients. Even more ambitious are projects like iConji. Like Renaissance thinker Francis Bacon, founder Kai Staats believes he can build a single language uniting strangers from Mumbai to Manhattan. Among the challenges he’s faced in doing so with symbols: distinguishing between this

. Meanwhile, a British company, Emojli, is attempting to create the world’s first emoji-only social network, where words aren’t allowed. “Many people have hoped for something that was both a language and beyond anything we know as a language,” says Zimmer. “With emoji, that’s more of a possibility. It’s just a question of what we do with it.” 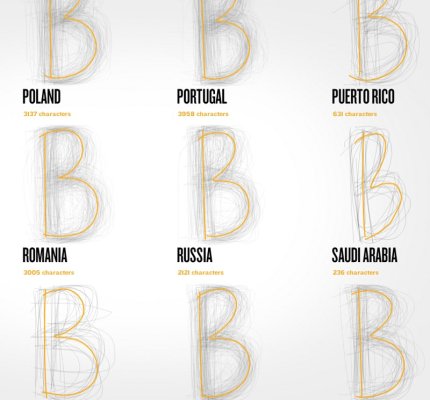 This Is the World’s Most Average Font
Next Up: Editor's Pick