A Palestinian man carries the body of a boy, one of four whom medics say were killed by a shell fired by an Israeli naval gunboat, on a beach in Gaza City.
Mohammed Talatene—Reuters
By Ilene Prusher / Jerusalem

Each time Israel goes to war in Gaza, there always seems to be some horrific military blunder that Israel surely wishes it could undo. This time, it’s the deaths of four young boys who had been playing hide and seek among fishermen’s shacks near the Gaza City harbor before an explosion from an Israeli airstrike killed them.

Peter Beaumont of the Guardian was among the journalists to document Wednesday’s incident most vividly. He had been sitting writing a story on the terrace of the nearby al-Deira Hotel, a favorite haunt of foreign correspondents, when the events unfolded before his eyes. He and other journalists tended three children who were injured by shrapnel, initially unaware that the four boys, aged between nine and 11, lay dead on the beach or in the sooty remains of a waterside shack.

The Israel Defense Forces (IDF) took responsibility for the strike — initially thought to have been carried out by a ship and later identified as an airstrike — and called the killing of the four boys tragic. “Based on preliminary results, the target of this strike was Hamas terrorist operatives,” the IDF said in a statement. “The reported civilian casualties from this strike are a tragic outcome.” The IDF added that it was “carefully investigating the incident in question.” But neither the promises to investigate nor the acknowledgement of innocent lives lost is likely to quell international dismay over the mounting death toll in Gaza from Israel’s Operation Protective Edge.

A proposed truce which fell apart a day before Wednesday’s strike left Israel looking like it was keen to meet “quiet with quiet,” a slogan Israeli Prime Minister Benjamin Netanyahu has used often recently to show his reluctance to get embroiled in another Gaza war. But Hamas, Islamic Jihad and other militant groups rejected the deal, saying they were not consulted in a plan which may have suited Jerusalem and Cairo, but didn’t meet Hamas’ basic demands. Following the ill-fated cease-fire’s collapse, Netanyahu’s Foreign Minister, Avigdor Lieberman, proposed in a press conference that Israel overthrow Hamas and re-conquer the Gaza Strip, from which Israel withdrew in 2005 after occupying the impoverished coastal territory for nearly four decades. An event like the four boys’ deaths could make such a ground invasion less palatable, and will likely increase diplomatic efforts to reach a cease-fire formula that both Israel and Hamas can tolerate.

Meanwhile, Israel has been trying to show its critics that it works harder than any other army to avoid civilian casualties more now than in than any previous flare-up between Israel and Hamas. Earlier this week, for example, the IDF released this video showing pilots making a last-minute decision not to bomb military targets because they detected too many non-combatants in the building set for destruction. A botched and brutal attack like Wednesday’s, however, underscores the gap between the sophisticated weaponry the IDF has at its disposal and the limits of the technology to prevent what military minds euphemistically like to call “collateral damage” — a bunch of preteens playing on the beach.

For Palestinians, the boys killed on the beach are likely to become icons of the conflict, joining a litany of horror stories in which whole families have been killed in single blows. The boys’ fathers, all fisherman, wrapped the children in the yellow flags of secular Fatah — not the green flag of Islamic Hamas — before they buried them, drastically damaging the message Israel hoped to impress upon average Palestinians: that it is at war with Hamas, not a whole people.

The IDF announced late Wednesday night it would hold its bombardments of Gaza for five hours on Thursday upon the United Nations’ suggestion. Hamas reportedly agreed to do the same several hours later. A UN official told TIME they had been working for several days to get Israel to agree to what they call a “humanitarian pause,” allowing aid workers to get to people in need and allowing Palestinians to go out and buy food. Earlier this week, the official said, two workers were killed in an IDF airstrike while they were out trying to fix damage to water and sewage pipes.

The IDF said that when the window is up, some people in Gaza should not return to their homes. “During this time, we will hold our fire in Gaza. This humanitarian window is meant to allow civilians to resupply needed goods,” the IDF said in a statement on its Twitter feed. “When the scheduled window ends at 15:00, Beit Lahyia, Shuja’iya & Zeitoun residents, for their own safety, should not return to their homes. If Hamas fires rockets at Israel during the humanitarian window, the IDF will respond with force.” 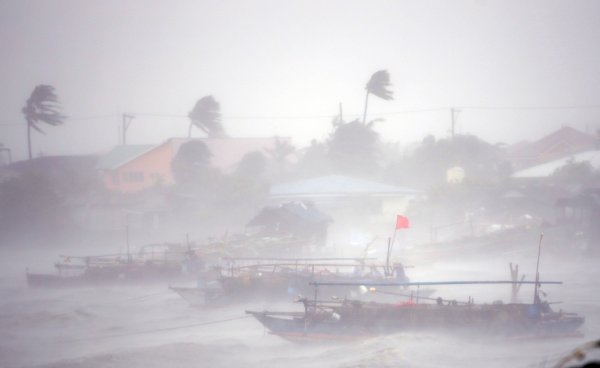 Typhoon Rammasun Rips Through the Philippines
Next Up: Editor's Pick