Louise Sheiner and Brendan Mochoruck of the Brookings Institution compared the Congressional Budget Office’s latest fiscal outlook with its projections from five years ago, and the shift is striking. In 2009, the CBO expected Medicare spending to skyrocket from 3% to 6% of GDP by 2030; it now expects much more modest growth to less than 4% of GDP. Overall, former CBO director Peter Orszag, President Obama’s first budget director, calculated the projected savings in federal health spending since the 2009 report at $7.9 trillion.

Those numbers, like all long-term budget estimates, could change radically. And while Obamacare’s cost controls contributed to the cost slowdown, it’s not clear how much they contributed. Policy wonks and political hacks will have plenty of time to argue about why the cost curve is bending. But the trend itself, as Orszag argues, is the most important trend in fiscal policy in decades. It’s the difference between a deficit crisis and a phantom deficit crisis. In 2009, graphs of projected federal health spending looked like ski slopes; graphs of all other spending looked like sidewalks. The long-term deficit problem was basically a medical problem.

Now it’s not such a problem. The question is whether Washington will notice.

Republicans have spent the last five-and-a-half years griping about the budget deficit, and most of their gripes have been absurd. They were wrong to accuse President Obama of creating a record trillion-dollar deficit, which he actually inherited from President Bush. They were wrong to criticize Obama for increasing the deficit with his 2009 stimulus bill, which was an amazingly effective Keynesian response to an economic crisis; the budget-balancing austerity approach the GOP was advocating led to much slower recoveries and double-dip recessions in Europe. And they were wrong to accuse Obama of turning the U.S. into Greece; the deficit has shrunk by more than half during his presidency, dropping from 10 percent of GDP to less than 4 percent as the recovery has progressed.

We still have a big national debt, and the CBO expects it to grow from 74% of GDP today to 106% in 25 years. We’ll spend trillions of dollars servicing that debt, and we should remember how Bush squandered President Clinton’s surpluses with unpaid-for tax cuts and unpaid-for wars every time we cut the check. But we are not Greece. Our finances are looking better in every way. 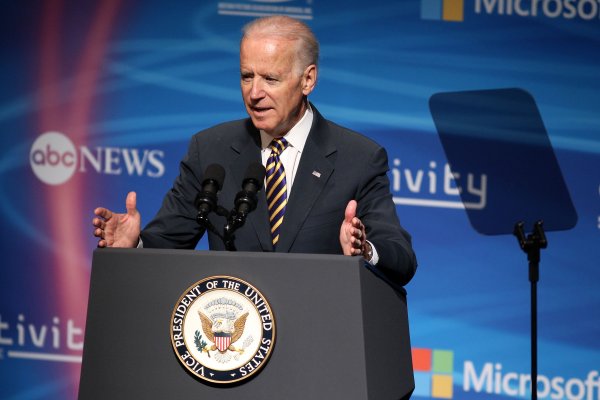 Biden: I 'Reject' Dick Cheney's Stance on Defense Spending
Next Up: Editor's Pick