TIME Exclusive: Here Are Rules of Using Emoji You Didn't Know You Were Following

There may not be anyone who knows more about emoticons than Tyler Schnoebelen, a man who literally wrote his Stanford doctorate thesis on the subject. He found, for instance, that older people tend to use emoticons with noses, such as [:-)], while younger people are more likely to drop the proboscis. He discovered that roughly 10% of all tweets contain an emoticon. And he observed that the phrase f*** you rarely appears with an emoticon, because those playful little symbols can trivialize feelings like totally hating someone’s guts.

Disclaimer: There is no instructional grammar primer on how one must use the little graphic symbols known as emoji. And if someone were to write such a work, it would likely be obsolete before it got off the printing press. People are still experimenting with the images, and you might use emoji unlike anyone else on this big ole planet.

That said, there are a few general rules you might not even know you’re following, which Schnoebelen has sussed out analyzing roughly 500,000 sequences of tweets.

Emoji tend to come at the end of messages.

You are much more likely to find this on Twitter:

Even when emoji appear in the middle of tweets, they often come between complete thoughts, like this:

They act like punctuation, providing cues about how to understand the words that came before them, as an exclamation point might. Emoji typically add to ideas rather than replace words. “They carry with them a fog of meaning. You can’t exactly pin down what any particular emoji means,” Schnoebelen says. “It’s not a story of simplicity, it’s a story of enrichment.”

If you want to point a gun at something, it has to go to the left of the barrel, he says.

And if one is telling a love story, as artist John Michael Boling does in this music video for electronica group Oneohtrix Point Never, that narrative goes like this:

A different order could convey an entirely different idea or story, when we’re used to reading our narratives from left to right. Schnoebelen found that when people are putting together sequences of Christmas tweets, the gifts almost always come after Santa and the tree, because Santa has to bring the gifts before they can appear.

In sets of two or three emoji, the stance comes before actions or other signals.

The face comes first. Consider “stance” the attitude or emotion you have about something, represented by a happy, sad or flirty yellow face. Schnoebelen found that tweeters make their stance clear right off the bat and then let the attitude displayed by that face help shade the interpretation of the emoji that follow. They are a “key” established at the outset, a bit like G major or C minor.

He found that this order, for instance:

Is far more common than this order:

He found that people weep and then have a broken heart:

Not the other way around:

The “stance first” rule may come from emoji and emoticons’ most potent power: conveying the sincerity or politeness or teasing that are so much harder to convey through text alone than through speech, body language and voice cues. “One of the main problems with text communication is that it’s just different from how we’ve talked to each other for most of the existence of language,” Schnoebelen says. “We’re dry in terms of the cues we get to use to signal exactly what we mean, to give nuance to the meaning,” he says. “Emoticons and emoji provide this nice shorthand.” 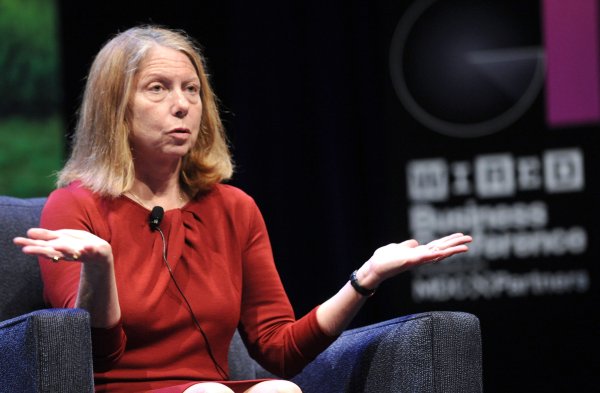 Jill Abramson Insists on Calling Herself 'Fired'
Next Up: Editor's Pick