You might pose the same question about the rom-com; these are perilous times for one of Hollywood’s richest and most reliable genres. Maybe modern culture is the culprit. The old trope of boy meets girl, boy loses girl, boy gets girl — a love story promising permanence — seems utterly out of sync with an age when boy and girl meet online, hook up in college, never need marry and, if they do, have a 50% chance of getting a no-fault divorce. Or perhaps we should blame bromance: the bonding of man to man has nearly replaced the guy-gal model.

Whatever the reason, no period in film history has been so rich in actresses primed to play romantic comedy and so poor in the quality of the movies they have to make. Veteran beguilers like Julia Roberts, Sandra Bullock and Diaz, and more recent stars like Jennifer Lopez, Reese Witherspoon, Katherine Heigl, Kate Hudson, Amy Adams, Elizabeth Banks and Emma Stone all boast deft line-reading skills and high adorability quotients, yet most of their rom-coms stink. The only reason not to write a learned essay on the topic is that’s it’s too depressing.

Grant the makers of Sex Tape — Segel and cowriters Nicholas Stoller and Kate Angelo working with director Jake Kasdan — their worthy attempt to update the traditional romantic comedy while adhering to the genre’s verities. Annie and Jay, whose love has deteriorated into rote endearments pronounced on the fly between more pressing duties, seize a rare night alone together without their two kids to rekindle the spark by performing all possible positions illustrated in Alex Comfort’s 1972 manual The Joy of Sex. They work away at it for three hours — apparently Jay has impressive powers of recuperation — and have a great, refreshing time. Small oops: Jay accidentally uploaded their improvised exertions to the cloud, for easy viewing by the many friends, relatives and acquaintances to whom he’s given an iPad.

(FIND: Alex Comfort’s The Joy of Sex on the all-TIME 100 Nonfiction Books list)

Ignore for the moment that Apple says this simply can’t happen, and consider the change in popular mores since 1995, when Pamela Anderson and Tommy Lee’s explicit tryst on a yacht stoked a sensation on something called VHS. (The very phrase “sex tape” is an endearing anachronism.) These days everybody’s doing it, recording it and uploading it. Nude selfies abound, and YouPorn is, according to one recent survey, the 83rd most popular website in the world, just slightly ahead of Time.com. For some people, like Paris Hilton, a sex tape is a career move; for others, like Anthony Weiner, a nude selfie is a career-ender. Annie, who is this close to securing a big payoff for her blog from a children’s toy conglomerate, would be in the latter category. She and Jay must suppress their video triumph.

Banks and Seth Rogen traveled a similar route as a nice couple who go down and dirty in Kevin Smith’s bumpily agreeable 2008 comedy Zack and Miri Make a Porno. There, both stars seemed willing, accomplished participants. In Sex Tape, Diaz fulfills her side of the bargain, miming radiance or desperation at the appropriate times, as if she were in a pretty good movie. Not so Segel, who in Forgetting Sarah Marshall and The Five-Year Engagement displayed the charm of an engaging galoot. This time he often speaks his lines — and remember, they’re lines he helped write — with the disheartened, robotoid elocution of a prisoner in an al Qaeda video.

He has our sympathy, since halfway into the film he’s being chased around a mansion by a ravenous German Shepherd. The swank digs belong to Hank Rosenbaum (Rob Lowe), CEO of the company that may buy Annie’s blog. At the office Hank is a dewy, bespectacled John Green type; at home he shows Annie his bizarre tattoos, the collection of paintings he’s commissioned — with himself as, for example, Rafiki in The Lion King — and his stash of cocaine. While Annie is talking and toking, Jay is in a death match with that vicious canine. It’s a scene from a worse movie than Sex Tape has been, but not as awful as Sex Tape will become in its endless and implausible third act.

Rob Corddry and the appealing Ellie Kemper (Erin Hannon on The Office) play the mandatory neighbor couple, and young Harrison Holzer nails the role of their snooty, scheming son. Lowe, who survived his own sex-tape scandal a generation ago and looks not a day older, lends a sweet derangement to the movie just as it’s going massively stupid: preposterous yet boring. Sex Tape doesn’t fall off the cliff of competence so much as it executes a slow, agonized mudslide of failed intentions. Your watch tells you that the film lasts 95 minutes; your sinking spirit says it’s at least as long as Jay and Annie’s porn epic — without the redeeming prurient interest. It’s a sex comedy about love. And that’s the oddest element of this latest demonstration that the romantic comedy is a fatally endangered species. 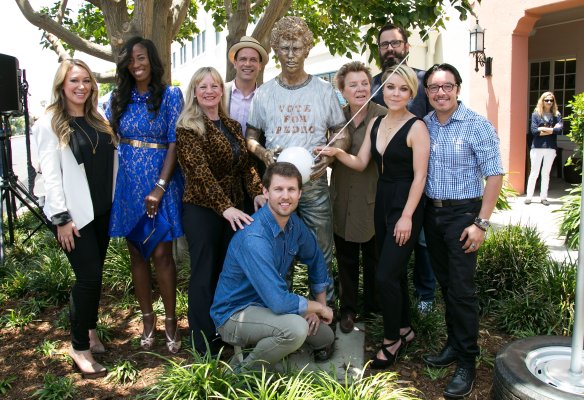 Here's a Brand New Photo of the Reunited Napoleon Dynamite Cast
Next Up: Editor's Pick