Dear Black Women: White Gays Are Your Allies, So Don't Push Us Away

In the earliest months of our relationship, my now-husband wanted me to understand something fundamental about his tastes, so he took me to a concert with acts I’d only vaguely heard of. I knew Queen Latifah, obviously, and was somewhat aware of Erykah Badu, but the rest of the lineup at the 2005 Sugar Water Festival, a short-lived summer showcase for black songstresses, were new to me.

Also new to me as a child of an upscale, white Long Island suburb: the composition of the audience. There were an overwhelming number of black women filling the vast Mandalay Bay Convention Center, which was unusual enough for a show on the Las Vegas Strip. But these women were accompanied, to my surprise, by more than a smattering of white men. Gay white men, that is. Very gay white men.

Those relationships fascinated me — and made a certain sense. It’s easy, once you start to imagine it, to see the natural connection between the two ostracized groups, both of which have translated that marginalization into defiant, self-affirming subcultures. My then new beau came of age in the urban nightclubs of Washington D.C., New York, and Tampa, all places where many white gay men found acceptance and common cultural cause with their oppressed black sisters who, in turn, flooded the scene, seeking places to revel away from so many predatory, demeaning straight men of all races.

Last week, that alliance came under attack by misguided University of Mississippi senior Sierra Mannie, who believed she was defending black women from cultural theft by launching an assault on white gays who, to her mind, behave too black. She zinged, “You are not a black woman, and you do not get to claim either blackness or womanhood. It is not yours. It is not for you.”

Others have already burned the piece down to its homo-ignorant nub, noting that Mannie writes cluelessly and obscenely about the nature and challenges of being gay. Her fire is fueled by some undeniably racist interactions, a supposed epidemic of white gay men who actually wish to be called by stereotypically black names and anoint themselves “strong black women.” It’s difficult to dispute that such behavior is weird and offensive, but it’s illogical to suggest all gay white men are “thieves” on that anecdotal basis alone.

Yet here’s what else Mannie overlooks in her full-frontal assault: White gay men as a group could be the truest friends black women can have in American society. No alliance is perfect, but this one has the potential, if nurtured properly, to reconfigure the stories of race and gender. White gay men — once intensely vilified but now able to harness our white male privilege for good, having learned what being on the outside is like — are a conduit through which black women can work against both countervailing forces that push them down.

Gay white men, in fact, pioneered a prototype for this. Not long ago, the biggest barrier for social acceptance for gays was heterosexual men. Then we co-opted them. At first, those old enough may recall, straight men refused even to speak to us, lest others perceive them as less than fully virile, if not gay themselves. Even those who deigned to be friendly did so at an arm’s length, claiming to be discomfited by irrepressible images of us — with them? — in sexual positions. Over time, this eroded. They liked our music. Straight women liked our clothes, our hair and our manscaping, and straight men will do just about anything to appeal to straight women. We were house-proud, fashion-forward, smart and funny, versed in both high and low culture. By the early 1990s, straight, urban men even accepted a hybrid moniker: the metrosexual.

Once those lines were blurred, once straight men not only accepted gay men but sought out our advice — remember “Queer Eye For the Straight Guy”? — men of all sexual orientations could see their similarities far outweighed their differences. Familiarity bred affinity, and affinity forced straight men to realize they had little to lose — and perhaps the admiration of straight women as a fringe benefit — by supporting full equality for gay people.

Our willingness to share our culture facilitated this detente. But “willingness” may be a strong word because it would have happened whether we were happy or angry about it. Mannie can bark at the gay white universe to lay off, but an appealing means of expression and art are the ultimate in open-source culture.

There is no question white gays have intrinsic advantages over black women in American society. Sure, we’ve taken our lumps, but black women certainly win the sweepstakes of oppression by a landslide. It is, in fact, this basic difference — race — that has enabled us to blitz through our civil rights movement in head-spinning fashion, while black women continue to face painful economic and political hurdles. Why did gay rights go from fantasy to entitlement in a blink of the historical eye, even as other oppressed minorities fend off efforts to deny them the ability to vote or obtain a decent education? Because so many of the gay men (and women) who came out were white and, thus, already embedded in the nation’s most powerful institutions.

But we’re here now, and we’re natural allies. The mutual fondness between so many black women and white gay men arises both from similar, if not shared, experience, but also a strikingly similar approach to coping with it. Some tropes emerged from black female culture and some from the gay world, but how or why is the stuff not of pundits or essayists, but of doctoral dissertations by social anthropologists. We aren’t going to get to the bottom of that on Twitter.

Still, cultural alliances like this are rare and should be treasured, not chastised. Black men didn’t have one. Neither did Jews or Native Americans. Arab Americans sure don’t. But through some fluke of cosmic association, black women have kindred spirits in white gay men. Don’t push us away.

Friess is an Ann Arbor, Mich.–based freelance writer and former senior writer covering technology for Politico, who teaches journalism at Michigan State University. You can follow him on Twitter @stevefriess. 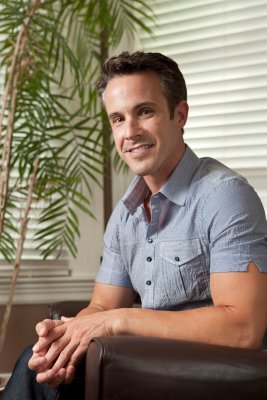 My Hellish Youth in Gay Conversion Therapy and How I Got Out
Next Up: Editor's Pick