The mighty Thor, that symbol of masculinity, aggression, violence and war, is going to be a woman. And it makes total sense.

Marvel announced the upcoming female incarnation of the character on The View Tuesday morning. The reaction was swift and, in many cases, far too negative. “I love women who kick add but Thor’s a dude,” [sic] wrote one Twitter user. “Marvel comics being stupid,” announced another. And then there’s this, from a Marvel editor:

Here’s the deal: Marvel Comics has long borrowed Norse mythology for many of its beloved characters and plots. That’s free intellectual property, after all. But the comics are only inspired by Norse mythology, and they’ve almost never followed the stories line-for-line (and even if they did, mythology suffers from a massive case of The Telephone Game, with lots of different tellings evolving over the years).

Thor, in the Marvel Universe, isn’t just a character: He’s also an intangible idea. And Thor’s power, which most notably includes the ability to summon up lightning to layeth the smacketh-downeth upon his foes, isn’t really embedded inside him, per se. It’s in his hammer, Mjolnir — to mix comic book universe metaphors, he’s more like Green Lantern, who derives his power from a ring that’s charged by a lantern that’s charged by a planet.

That wasn’t always the case. Thor’s power used to be embedded in Thor directly. But when Thor’s father, Odin (also the king of Thor’s realm, Asgard), wanted to punish Thor for violating his direct commands, Odin stripped Thor of his powers and enshrined them instead in Mjolnir. Here’s the spell Odin put on the hammer to do so:

Translation: To get Thor’s power, you have to be deemed worthy of it by successfully picking up the hammer. In most Marvel Thor origin stories, eventually Thor redeems himself, reclaims his hammer (without first knowing why he couldn’t pick it up any longer) and then becomes the “real” Thor again, ready to return to his lightning-summoning, hammer-slinging self.

But Thor isn’t the only person who’s lifted the hammer: Captain America, the Hulk (eventually!) and Superman (crossover!) were deemed worthy and got Thor’s power. Who does the deeming is something of a mystery, but I’ve long thought that Mjolnir itself is sentient and the hammer itself decides who’s worthy of it.

And there’s the rub: What will probably happen in the Marvel comic book that introduces the new female Thor is that the male Thor we’ve all known for decades will either bite the bullet or do something to piss off the hammer. Either option would mean Thor couldn’t be Thor any longer, and some female character will come along — whether Asgardian or otherwise — try to pick up the hammer, succeed, and effectively become a female Thor. That Odin’s spell specifically says “he” doesn’t really matter: Storm and Wonder Woman (another crossover!) have both been deemed worthy, signaling Mjolnir has perhaps developed a less strict constructionist ideology about itself than Odin ever had.

Of course, a female Thor won’t really address another problem facing the comic book world: The lack of original, well-advertised female superheroes, particularly at the movies. None of the upcoming DC or Marvel films, for example, feature a woman — no Wonder Woman from DC, no Black Widow flick from Marvel. The best we’ve gotten so far are Elektra and Catwoman, both total flops. Both companies will need more than a female version of a top character to fix that issue. 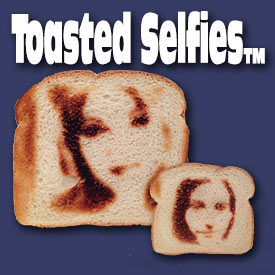 You Can Finally Start That Shrine to Yourself With This Selfie Toaster
Next Up: Editor's Pick