Marvel Comics Writers Explain Why They're Making Thor a Woman

Marvel announced on The View Tuesday morning that a woman will take up Thor’s mantle–err, hammer. Fans were shocked to find out that for the foreseeable future, the long, blonde locks waving under Thor’s Norse helmet in the comic books will belong to a lady.

The announcement comes during a groundswell of support for female superheroes. Wonder Woman will get her long-awaited big screen debut (albeit in a Batman-Superman movie), the Power Puff Girls are returning to TV and a new line of female super hero action figures is set to hit shelves this holiday season. Fangirls, it turns out, are the great untapped resource of the comic book world, and they want to see more characters that look like them: 47% of comic fans are female, and women made up 62% of the Facebook fans of female comic characters (including Black Widow, Elektra and She-Hulk), according to Comics Beat.

TIME called the writer and editor of the Thor comics, along with Marvel’s editor-in-chief, to find out why they made Thor a woman, how male and female fans have reacted and whether we’ll see a female Thor onscreen.

TIME: Why make Thor a woman instead of creating a whole new female character in the series?

Wil Moss, Marvel Comics editor of the upcoming Thor series: We can’t give away all the story details now obviously, but once the story is out there, it becomes clear why there’s a new female Thor. It’s not about filling a certain quota. It’s about providing a shot in the arm to the Thor titles definitely, but it’s something that’s a natural part of where this story and the Thor title is going.

TIME: Has there ever been a female Thor before?

Axel Alonso, Marvel’s Editor-in-Chief: She wields the hammer because Thor can’t. This is different because for reasons we can’t disclose quite yet, Thor is unable to pick up the hammer. There are a number of women in Thor’s life, and we’re going to tease out for quite awhile the identity of who this woman is. But one of the women in Thor’s life picks up the hammer. She is in fact worthy. And she becomes Thor.

There’s only one Thor in the Marvel Universe. The character we know as Thor will not refer to himself as Thor anymore.

TIME: How many times has the hammer changed hands?

Alonso: There’s been plenty of moments also in Marvel history where characters have attempted to pick up the hammer. The Hulk, who is arguably the strongest character in the Marvel universe, has tried on numerous occasions and not been able to lift it. So it’s not a matter of how heavy it is but whether that character is worthy.

TIME: How do you think this will impact fans who have been following the male version of Thor for such a long time?

Jason Aaron, writer of the Thor series: If you’re a long-time Thor fan you know there’s kind of a tradition from time to time of somebody else picking up that hammer. Beta Ray Bill was a horse-faced alien guy who picked up the hammer. At one point Thor was a frog. So I think if we can accept Thor as a frog and a horse-faced alien, we should be able to accept a woman being able to pick up that hammer and wield it for a while, which surprisingly we’ve never really seen before.

Alonso: There really is this one Thor for an extended period of time for which we have no real exit plan.

Moss: The male Thor—he’s still going to be around. He’s still a character.

Aaron: I’ve been writing Thor: God of Thunder for about 25 issues now. This is in some ways a continuation of everything that I’ve been doing on that. We’re not throwing out everything that’s come before.

TIME: There are a lot of female comic fans who are excited about this because they always love to see characters and superheroes who look like them. Is Marvel conscious of trying to engage with its female readership more?

Alonso: Yes, we absolutely are. We see fans of all shapes and sizes and genders in comic stores and at conventions. And we perceived there to be a real thirst for characters that reflect what we see in the mirror. From Miles Morales, the African-American Spider-Man, to the new female Thor, our goal is to make our characters reflect the outside world.

Right now we have eight titles that are anchored by female leads where it’s that character’s name on the masthead. We’re definitely committed to growing that audience.

TIME: Do you change the way you write for a female character at all?

Aaron: No. I mean, it doesn’t change for me. The story didn’t come about because of any sort of mandate. It’s not like we threw a dart at a board and said we’re going to change this character and make it a female. This was the natural progression of the story I was telling and that’s been building in Thor history for decades now.

I’ve written stories about Canadian mutants who are 150 years old and about aliens in space. It doesn’t matter: I’m clearly not any of those people. But it doesn’t matter the race or gender or where those people are from. It’s all about figuring out that character and telling your story.

TIME: I know you’re on retreat but have you seen the reaction online? And if so, what do you think of the ways that fans have reacted so far?

Moss: It all seems really positive so far. There’s some complainers, but that’s always going to be the case. From what we’ve seen people seem really excited.

Aaron: People have a lot of questions on Twitter: what’s going to happen to the previous version of Thor? Who is this new version? That’s good that people have questions. We’re not going to answer all those right now. Those are things that will be developed over the course of many issues. So it’s a good think people are asking those questions.

Alonso: We’re used to having a lot of feedback when we make an announcement like this, something that could be controversial. And we’re also used to the first wave of feedback being negative. I can say unequivocally that there’s no amount of negative feedback we could get right now out the gate that would stop us from publishing this story because we think it’s worth publishing. And that’s that.

TIME: Is this going to have a long-term impact on the franchise and will this affect any future Marvel movies?

Chris, D’Lando, PR for Marvel: We do the best stories as we can, and whatever Marvel Studios wants to co-opt for their franchises, they do it, and we’re happy to help them with that. But right now we’re focusing that Jason’s story is the best and biggest it can be.

Aaron: This will have long-term effects on the title. This isn’t something that’s just going to last for a few issues. She is Thor. She will carry that hammer in her own books and the other books as well. So for the foreseeable future this is Thor. 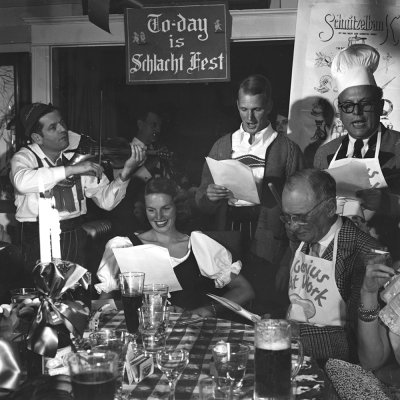 House of Suds: Portrait of the Busch Beer Dynasty at Play
Next Up: Editor's Pick