The Reality Behind That (Literally) Shocking Masters of Sex Scene

This post contains spoilers for the season premiere of Masters of Sex.

It’s no secret that Showtime’s Masters of Sex has history behind it. It’s about Masters and Johnson, the real-life researchers who revolutionized the study of human sexuality. But as demonstrated by the season two premiere, which aired July 13, the two main characters aren’t the only ones whose actions are backed up by truth — more or less.

Case in point: Barton Scully. After his internal struggle with his sexuality came to a head last year, Masters’ former boss took drastic measures in an attempt to “cure” his homosexuality. Although his wife had strongly discouraged him from doing so, for fear of the side effects, he decided to undergo shock therapy. The process, as shown on screen, was fairly ghastly. He’s wheeled into an operating room, injected with something (probably an anesthetic), given something to bite down on and shocked via electrodes to the head. When he wakes up, he’s confused, calling for his wife and vomiting on Dr. Masters. A little later, he claims to be feeling entirely fine, but it’s clear that (a) the therapy didn’t accomplish what he wanted, and (b) he’s anything but fine.

In the 1996 oral history of punk Please Kill Me, Lou Reed describes having a similar experience in the early 1960s: “They put the thing down your throat so you don’t swallow your tongue, and they put electrodes on your head. That’s what was recommended in Rockland County then to discourage homosexual feelings. The effect is that you lose your memory and become a vegetable.”

So was the Masters depiction accurate? Kind of. The biggest issue seems to be the show’s fictionalized timeline, which doesn’t always jibe with actual history.

Such experiences of electroconvulsive therapy (ECT) were more typical of the years before the early 1950s, according to Dr. David Healy, co-author of Shock Therapy: A History of Electroconvulsive Treatment in Mental Illness. By the early 1960s, when the episode purports to have taken place, Healy says the therapy had been refined from its earlier, scarier format. Scully’s twitching and flailing arms and legs are a sign of “old-style ECT,” he adds. Furthermore, though a short period of confusion is normal after ECT, the anesthesia often meant that the patient would just sleep through that time.

“That [old style] had gone out by the mid-1950s,” he says. “If this happened in the early 1960s then there’s just no way that ECT would have looked like [it did on the show] unless it was being done in some barbarous backwater.”

Healy also notes that, though Lou Reed’s description seems to parallel what’s seen in Masters of Sex, using ECT to the head to try to “cure” homosexuality wasn’t typical treatment, even at that time. What was far more common was aversion therapy, similar to what Scully tried last season but with electric shocks: the shock would be administered, sometimes to the genitals, while the patient looked at images of the “wrong” gender. The idea was that such images would become frightening rather than arousing. Healy also notes that antidepressants, which “have a profound effect on sexual functioning generally,” were used to “convert” patients, and that ECT is an antidepressant technique. (It’s still used to deal with depression today; Healy says that it has pros and cons, like any antidepressant, but that it’s a valuable option in a psychiatrist’s toolbox.)

Even if the ECT shown on Masters of Sex was behind the times, it’s not fiction to note that Dr. Masters did have an interest whether homosexuality could be altered. In 1979, Masters and Johnson published a book called Homosexuality in Perspective that addressed just that topic. As TIME reported at the time, they claimed a mere 35% failure rate at “conversions,” a statistic that met with skepticism even then.

In the same article, TIME also reported that, “The book has another implicit message for heterosexuals: it is that homosexuality is not going to go away, whether society ignores it, accepts it or rejects it.” 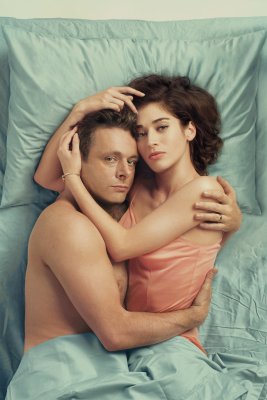 Behind the Unusual Opening Credits to Masters of Sex
EDIT POST