8 of the Absolute Worst Times to Take a Selfie

A participant runs in front of Jandilla's bulls as he takes a 'selfie' (photograph of himself) during the fifth bull-run of the San Fermin Festival in Pamplona, northern Spain, on July 11, 2014.
Rafa Rivas/AFP – Getty Images
By Olivia B. Waxman

Police have been looking for the man who took a selfie during the Pamplona bull run, CNN reports. Carrying cameras had been banned to ensure the safety of festival-goers. While eight people were gored during the eight-day event, this man reportedly was not injured, but does face a fine of $4,100.

So in case you needed a reminder, below we’ve collected some of the most dangerous and inappropriate places to take a selfie. As millennials say, “can u not?”

As Tour De France Cyclists Are Trying to Race

Fans who try to take a quick selfie on the road as the athletes zoom by are endangering the lives of the riders. An American cyclist vented about the distraction on Twitter:

In Front of a Speeding Train

A guy who tried to take a selfie in front of an oncoming train got kicked in the head by the conductor in April.

At a Concentration Camp

Teens boasting “duck faces” and using language like “With my Besties at Auschwitz” has “fed a perception of today’s youth as a bunch of technology-obsessed, self-indulgent narcissists,” as a New Yorker editorial aptly described the outrageous trend.

Likewise, the Tumblr “Selfie at Funerals“, featuring youngsters taking photos in front of their deceased grandparents lying in coffins, raised questions about the appropriateness of taking selfies at such somber occasions, which are often in religious places. However, in a Guardian op-ed, the site’s creator Jason Feifer declared “victory” after President Obama took a selfie with UK Prime Minister David Cameron at Nelson Mandela’s memorial service.

During an Emergency on the Brooklyn Bridge

A woman at Brooklyn Bridge Park snapped a selfie that captured cops rescuing a suicidal man on the Brooklyn Bridge in the distance. The moment made the cover of the Dec. 4, 2013, issue of the New York Post with the headline “My photo with Brooklyn Bridge suicide dude” plastered over the picture.

When Your Pregnant Teacher Is Having Contractions

All-smiles, this junior at Coral Springs High School north of Miami tweeted a photo of himself standing in front of his teacher, who is reportedly on the phone with her mother while she is having contractions. Local10.com reports she ended up not having the baby and went back to school the next day.

We think we can safely say that AAA should not have had to publish a press release urging drivers to stop taking selfies while driving and tagging them with #drivingselfie, #drivingtowork, and #drivingfast.

As a Baseball Soars Towards Your Head

In this selfie at Fenway Park, a baseball looks like it barely missed reporter Kelly Nash’s head before the Astros-Red Sox game. 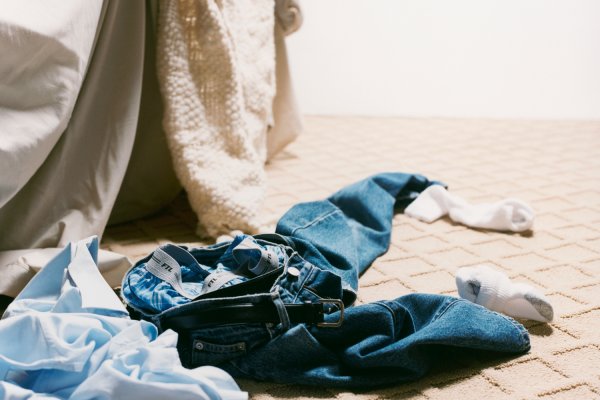 "First Kiss" Director's Latest Video Shows "Strangers" Undressing in Front of Each Other
Next Up: Editor's Pick