10 Brands That Will Disappear This Year

DirecTV satellite dishes are seen on an apartment roof in Los Angeles, May 18, 2014.
Jonathan Alcorn—Reuters
By Douglas A. McIntyre

Retail continues to be one of the sectors with several troubled companies that may have to be sold to survive. The 24/7 Wall St. list includes Lululemon Athletica Inc. (NASDAQ: LULU) and Aeropostale Inc. (NYSE: ARO). Both specialty retailers are in highly competitive spaces. While Lululemon is battling Gap’s aggressive move into the yoga pants space, Aeropostale’s teen line of branded clothes is losing out to low-cost, fashion-forward brands like Forever 21 and H&M.

The consolidation of the broadband industry may also cause some companies to disappear. Time Warner Cable Inc. (NYSE: TWC) will likely be sold to Comcast Corp. (NASDAQ: CMCSA). DirecTV (NYSE: DTV) will likely be bought by AT&T Inc. (NYSE: T). These transactions are part of a much larger movement to become the exclusive providers of entertainment to American homes.

While telecom companies interested in increasing market share have the option to install a fiber network to take market share from cable, that comes at a great cost. Merger trends in the industry indicate it may be better to buy than to build. Comcast and AT&T certainly believe so. Having a larger market share could also allow these companies greater price leverage with content providers like Netflix and premium cable channels.

Adoption of mobile and the massive size of some of Web 2.0 companies has also contributed to the list. Zynga Inc. (NASDAQ: ZNGA) was well positioned when it was able to market Farmville to Facebook’s users. But it is doing poorly after failing to come up with another hit, moving slowly on mobile and losing its special relationship with the social networking giant.

While Shutterfly Inc. (NASDAQ: SFLY) makes a tidy profit selling photos for greeting cards and calendars, it is also up against free photo sharing services such as Instagram and Facebook Inc. (NASDAQ: FB). The photo printing site is currently looking for a buyer.

A number of the biggest food packaging companies are also in the market. Russell Stover is the third largest chocolate company in America. However, third place is miles behind the leaders, particularly Hershey Co. (NYSE: HSY). Stover’s management has decided to give up operating on its own and has put itself on the market.

Hillshire Brands Co. (NYSE: HSH) will also almost certainly be sold this year. It has already signed an agreement with Tyson Foods Inc. (NYSE: TSN). But Tyson did not get the prize without an expensive fight with Pilgrim’s Pride Corp. (NYSE: PPC), which gives a sense of the value of food companies to their rivals.

In 2012, we predicted that Research In Motion would disappear. Last year, the company changed its name to BlackBerry Ltd. (NASDAQ: BBRY). The company is on the list again this year under the new name. The company continues to be in serious trouble after being wildly successful for many years.

Reviewing last year’s list, we have had some winners and some bad calls. We called Nook and Leap Wireless correctly. Last month, Barnes & Noble announced it would spin off its Nook e-reader as sales continue to plunge. Leap Wireless was acquired by AT&T late last year.

We have yet to be proven right — or wrong — about the balance of the list. Revenues for Martha Stewart Living and Road & Track magazines continue to be weak, but they also remain in the business. Sales of Mitsubishi and Volvo are among the lowest in the auto industry, but you can still buy their cars. Similarly, LivingSocial continues to offer deals, WNBA to sell tickets and Olympus to make cameras. While these calls haven’t proven right yet, we have until the end of the year.

After five years of making predictions, we are proud of our record. Out of the 49 companies that have made our list, 24 have disappeared. Given that these brands were chosen from a universe of thousands, we think it’s an impressive record.

We continue to use the same methodology in deciding which brands will disappear. The major criteria include:

Each brand on the list suffers from one or more of these problems. Each of the 10 will be gone, based on our definitions, within 18 months.

It is not hard to identify when the fortunes of the women’s athletic apparel company changed. On March 18, 2013, Lululemon recalled a large portion of its yoga pants because they were too sheer and as a result too revealing. The problems did not end there and resulted in management changes, revenue drop offs and a collapse of its share price.

The fallout cost CEO Christine Day her job in June 2013. Founder and Chairman Chip Wilson announced that he would step down in December of last year. Wilson has since returned as the potential leader of a buyout to take the company private. Wilson believes he can find a private equity backer. He will likely be able to buy Lululemon at a discount price, at least based on what its shares traded for at their peak.

Lululemon’s last quarterly financial statement shows the extent of the company’s troubles. Revenue at the previously fast growing company was up only slightly to $385 million from $346 million in the same period a year ago. However, net income collapsed from $47 million to $19 million. The stock is down 50% from its peak set at the start of June 2013.

AT&T’s plan to buy satellite TV giant DirecTV is an example of a broadband carrier trying to extend its reach into American households. AT&T’s U-verse fiber to the home broadband and TV product has only been modestly successful. It has 5.7 million customers to DirecTV’s 38 million.

The $49 billion deal has to clear federal regulation. Some members of Congress have sharply questioned AT&T’s management about the consumer benefits. While the two companies argued their marriage will lower consumers’ costs, some consumer groups believe that prices will go up and the new company will be able to control access to popular programming like NFL games.

AT&T has reason to fight for the deal and make sure it closes. Its attempted bid to add wireless broadband capacity via a buyout of T-Mobile was blocked by the government. Beyond that, increasing customers by more than six times makes the business case for the deal even more compelling.

MORE: Countries that Spend the Most on Health Care

Hillshire Brands, which markets Ball Park hot dogs and Jimmy Dean sausages, the top-selling products in their categories, has been on the radar of several food packagers. The company reached an agreement to buy Pinnacle Foods in May for $4.23 billion. But the agreement sparked interest in Hillshire and triggered a bidding war for the company among the largest food packagers in the country, Tyson Foods and Pilgrim’s Pride.

Hillshire accepted Tyson’s final offer of $8.5 billion including debt, a nearly $1 billion premium over Pilgrim’s offer and a 50% premium over its share price prior to the bidding war. To close the Tyson deal, Hillshire had to terminate the Pinnacle agreement. Tyson expects the Hillshire buyout to close before the end of its fiscal year, but that does not mean the fight is over. Pilgrim’s Pride may not go away and might still offer a higher bid.

Zynga can be considered the single greatest social media failure among recent IPOs. The leading provider of games on Facebook has been unable to match the success of Farmville, its first hit. Facebook also ended its relationship with the gaming company in 2012, effectively limiting Zynga’s access to the social network’s 1 billion users and making it harder for the company to promote its games.

The company moved slowly into the mobile platform, and after it failed to create big hits of its own, it acquired popular titles such as Draw Something and Words With Friends. But new rivals like King Digital, maker of popular mobile game Candy Crush, continue to crowd the market. Similarly, traditional game companies like Electronic Arts have also begun to migrate their titles to mobile devices, challenging the social gaming company’s position.

MORE: Ten States with the Most Student Debt

Alaska Air Group Inc. (NYSE: ALK) is one of the few remaining independent airlines in the United States that is not owned by one of the four larger carriers. Even larger airlines have been acquired: Northwest was bought by Delta, Continental merged with United and U.S. Airways joined with American Airlines. The recent consolidations in the industry have been successful, leading to significant cost cuts. Alaska Air, with its profits and customer service reputation, is the last real prize left.

There has been speculation that Delta might buy Alaska Air for its West Coast routes. The rumors have pushed Alaska Air shares higher.

Alaska Air is particularly strong in the busiest West Coast markets, especially in Salt Lake City, Los Angeles and Seattle. It has also begun to challenge carriers in East Coast markets, including several cities in Florida. Revenue and net income have risen steadily over the past five years. And Alaska Air often ranks highest in customer satisfaction among traditional carriers. 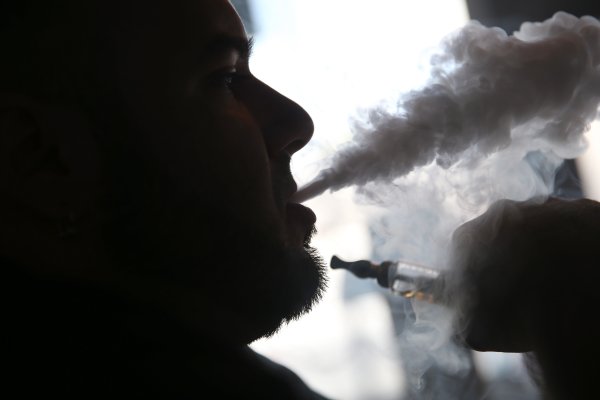 This Big Tobacco Merger Would Unite 2 Major E-Cig Brands
Next Up: Editor's Pick