The ride-sharing service Lyft has delayed its launch in New York following a request for a restraining order by the state attorney general’s office. In a joint statement, New York Attorney General Eric Schneiderman and State Superintendent of Financial Services Benjamin Lawsky said they sought the restraining order after failed attempts to get Lyft to comply with state law.

“Instead of collaborating with the State to help square innovation with statute and protect the public, as other technology companies have done as recently as this week, Lyft decided to move ahead and simply ignore state and local laws,” the statement reads. “Lyft’s arguments are a disingenuous attempt to disguise old-fashioned law-breaking that jeopardizes public safety.”

Lyft is an app-based service that allows regular people to offer rides to strangers in their area in exchange for money. The company has argued that it is not a taxi service and therefore should not be bound to the regulations of New York’s Taxi and Limousine Commission. Following this week’s legal wrangling, though, the company says it will now seek TLC approval before launching in New York. “We agreed in New York State Supreme Court to put off the launch of Lyft’s peer-to-peer model in New York City and we will not proceed with this model unless it complies with New York City Taxi and Limousine regulations,” the company said. “We will meet with the TLC beginning Monday to work on a new version of Lyft that is fully-licensed by the TLC.”

The joint statement from the government originally claimed that the attorney general’s office had successfully lobbied the state Supreme Court to issue a temporary restraining order against Lyft. However, after Lyft said that no such order was issued, the office changed its statement to say that an “injunction” had been issued. Lyft maintains that neither a restraining order nor an injunction was issued, but that the court adjourned and the company agreed to postpone its launch.

Other car-hailing tech companies like Uber have gone through the TLC to operate in New York. The ones that haven’t, like Sidecar, have been kicked out of the city. “We are committed to fostering a competitive marketplace where each participant is treated fairly,” the statement by Schneiderman and Lawsky said. “We are hopeful that Lyft will now recognize that it has to play by the same set of rules as everyone else.”

Lyft was originally scheduled to launch at 7 p.m. Friday with service in Brooklyn and Queens. The company still plans to host a launch party Friday night in Brooklyn. 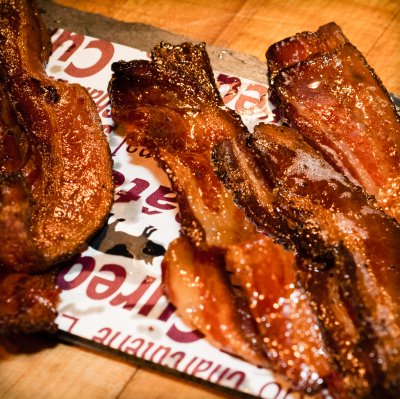 The Ultimate Bacon Guide
Next Up: Editor's Pick