Officials Say Iran Is Hamas' 'Enabler' in Fight Against Israel

A picture taken from the southern Israeli Gaza border shows a militant rocket being launched from the Gaza strip into Israel, on July 11, 2014.
Menahem Kahana—AFP/Getty Images
By Michael Crowley

In a reminder of the Middle East’s intertwined nature, the latest violence between Israel and Hamas has U.S. and Israeli officials lamenting the role of a key actor hundreds of miles east of Gaza: Iran.

“Who is the enabler for Hamas? Where do they get those rockets?” asked House Foreign Affairs Committee Chairman Ed Royce Friday morning. “It’s Iran.”

American and Israeli officials have long accused Iran of helping Hamas build up its massive arsenal of rockets, including some with a particularly long range, which it is now firing into Israeli cities and towns.

“Iran continues to do everything it can to push rockets into Gaza,” says Israel’s ambassador to Washington, Ron Dermer. “Iran obviously is a supporter of Hamas. And Islamic Jihad is a wholly-owned subsidiary of Iran” (Islamic Jihad is militant group smaller than Hamas that also operates within Gaza.)

The current wave of violence was triggered after the murder of several teenagers, three Israelis and then one Palestinian, apparently by extremists on both sides. More broadly, it is the product of the historical conflict between Israel and the Palestinians. But it also represents the latest chapter in an intermittently violent cold war between Israel and Iran, which has long funded and supplied arms to Palestinian militants who attack Israel.

At issue now is Iran’s shipments of rockets into Gaza, shipments that are thought to have gone on for years. The rockets are transported by ship from Iran to Sudan, driven into Egypt’s Sinai peninsula, and then smuggled into Gaza through secret underground tunnels that run from Egypt into Gaza. Israel has blockaded Gaza’s borders ever since Hamas—which openly calls for Israel’s destruction—assumed power there in 2007.

Hamas can probably thank Iran for some of the most dangerous rockets it fired into Israel this week. They appear to be M-302s, whose range of 100 miles is longer than most in Hamas’s arsenal—which typically travel about ten miles—and can threaten northern Israeli cities. In March, Israel interdicted a ship carrying forty M-302 rockets it said were destined for Gaza; a United Nations report concluded last month that the rockets originated in the Iranian port of Bandar Abbas. Israeli officials don’t believe that shipment was the only one of its kind.

The good news from Israel’s perspective is that smuggling arms to Hamas has become harder since last summer’s military coup in Egypt deposed a pro-Hamas Muslim Brotherhood regime in Cairo. The new regime of Abdel-Fattah el-Sisi, who strongly opposes Hamas, has mostly sealed the tunnels into Gaza (Both Hamas and Iran have denied such shipments.)

Hamas isn’t solely reliant on outsiders for its weapons. “A lot of the rockets are coming now from being domestically manufactured,” said Dermer on a conference call with reporters Friday. “That was not the case 18 months ago. Eighteen months ago, most of the rockets were coming from outside.”

However, even those homemade rockets bear Iranian fingerprints, say Israeli officials. Tehran has assisted Hamas and Islamic Jihad in developing their own manufacturing capabilities inside Gaza. “Iran is the principle source of know-how” for such efforts, an Israeli military intelligence official said in June.

There is no sign that Israel intends to retaliate against Iran. But some analysts believe that Israel uses confrontations like this one to send a message to Tehran, which also arms the anti-Israel group Hezbollah in southern Lebanon, and whose nuclear program some Israeli leaders declare an existential threat. When Israel last clashed with Hamas in November of 2012, for instance, one columnist for the Israeli newspaper Ha’aretz wrote that Israel’s response “seems to be aimed at the Palestinian arena, but in reality it is geared toward Iranian hostility against Israel.”

Israeli Prime Minister Benjamin Netanyahu may see the current crisis as an opportunity to deal a crippling blow to Hamas, which one former Obama administration official with Middle East expertise describes as “desperate” now that Egypt has sealed many of its underground smuggling routes. Hamas’s relationship with Iran has also wobbled over the Syrian civil war, as the the Sunni Palestinian group and Tehran’s Shi’ite clerical regime have supported different sides in that sectarian conflict (although the two have recently struck a friendlier tone.)

Iran’s stake in the Israel-Hamas fight means that Tehran has a hand in three live conflicts at the moment. In addition to its strong support of Syrian ruler Bashar Assad, Iran has provided military aid to Iraq’s Shi’ite ruler, Nouri al-Maliki, who is fending off an invasion from Sunni radical group the Islamic State of Iraq and Syria and its Iraqi Sunni allies.

Meanwhile, Iran’s support for groups that oppose and attack Israel will remain a thorny issue in U.S.-Iranian relations as Washington tries to strike a nuclear deal with Tehran. Many of the economic sanctions currently imposed on Iran are based on the country’s support for terrorism and weapons proliferation.

Iran’s supply of rockets to Hamas “does raise the issue of how Iran is a proliferator,” said Chairman Royce, who spoke at a breakfast with reporters in Washington. He said any talks with Iran should include the question of “how do you stop this penchant for proliferation?” 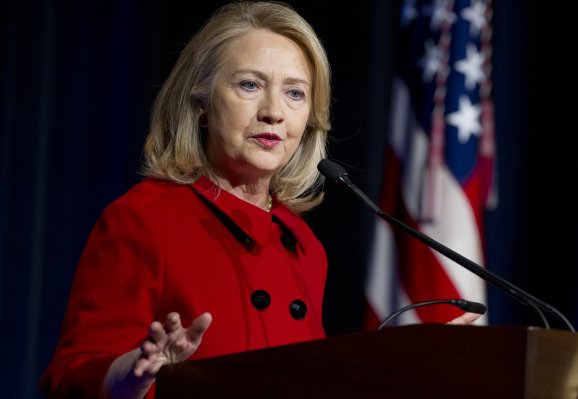 Here's What John Kerry Can Learn From Hillary About Israel's New Crisis
Next Up: Editor's Pick