If LeBron has any “haters” left, now’s not a bad time to exit that whole silly business.

In a simple, direct, and utterly genuine essay penned, with the help of writer Lee Jenkins, on SI.com, James announced Friday he’s coming home to Cleveland. He’s leaving the Miami Heat, which has won two championships during his four years in South Beach, for a team with the worst record in the NBA since he departed in 2010. Why would he take less guaranteed money with Miami, and much shakier prospects at adding more rings to his fingers, to sign with the Cavs?

“My relationship with Northeast Ohio is bigger than basketball,” James wrote. “I didn’t realize that four years ago. I do now.”

No chirping about taking his talents somewhere. “I’m not having a press conference or party,” James writes. He just a offers a frank assessment of where his head is at now, compared to where it was four summers ago, when he made his infamous “Decision” on national television. James’ openness, and emotional maturity, should be applauded. He admitted what any reasonable person watching James in that Boys & Girls Club four years ago could see: he was stressed as all hell about leaving Cleveland. He looked somewhat miserable that evening.

“I was thinking, this is really tough. I could feel it,” James writes. So could everyone else. “I was leaving something I had spent a long time creating.”

But he needed that first ring, and knew, back then, that joining up with Dwyane Wade and Chris Bosh in Miami was the easiest path to that goal. “When I left Cleveland, I was on a mission,” James writes. “I was seeking championships.” After sports fans cheered when the Big Three lost to the Dallas Mavericks in 2011 NBA Finals — and LeBron underperformed — James became a happy mercenary. You can still criticize him, I guess, for avoiding the rough road to a title. Michael never left Chicago. Bird never left Boston. Magic never left the Lakers. Kobe never left the Lakers. Isaiah Thomas never left Detroit. But LeBron never had his Scottie Pippen, his McHale and Parish, his Kareem and Worthy, his Shaq, his Joe Dumars and his Bad Boys. And bottom line, when James writes, “I became a better player and better man” in Miami, he’s absolutely right. He put in the work to develop a post-game, to become a more efficient outside shooter and creator. He took no easy road.

He’s made his peace with Dan Gilbert, the Cavs owner who torched James when he left for Miami. “I’ve met with Dan, face-to-face, man-to-man,” James writes in SI. “We’ve talked it out. Everybody makes mistakes. I’ve made mistakes as well. Who am I to hold a grudge?” Gilbert is so, so lucky that James is a “better man.” No one would have blamed James if he never wanted to work for someone who became so unhinged.

So James is coming home to write the fairy tale ending, and try to deliver Cleveland its first major sports title since 1964. The Cavs team he left in 2010 was probably more championship-ready than the one he’s coming to (unless Cleveland can land Minnesota’s Kevin Love in a trade). Now, he’s voluntarily taking a rougher road — at less money, we should repeat — for more hardware. Should Miami fans feel cheated? Ha. Lebron helped the Heat win two more titles, on top of the one Wade delivered, nearly on his own, in 2006. The Miami Heat made its franchise debut 26 years ago, and have won three championships. You know how many franchises have won more titles than Miami over that period? Just three: the Chicago Bulls, Los Angeles Lakers and San Antonio Spurs. Detroit, like Miami, has won three. So 25 NBA teams, and fan bases, would love to have Miami’s problems. Also, South Beach isn’t the most sympathetic fan base. Remember when all those people left Game 6 of the 2013 Finals, and tried to get back into the arena after Ray Allen’s killer game-tying three kept the Heat alive in a series it would go on to win?

LeBron’s reportedly off to Brazil, to watch the World Cup final. Over the next few days, he’ll let the fans and pundits back home dissect this momentous move. He’s already written his piece. Millions of captivated hoops fans will be watching, over the next few seasons, to see how the story ends. 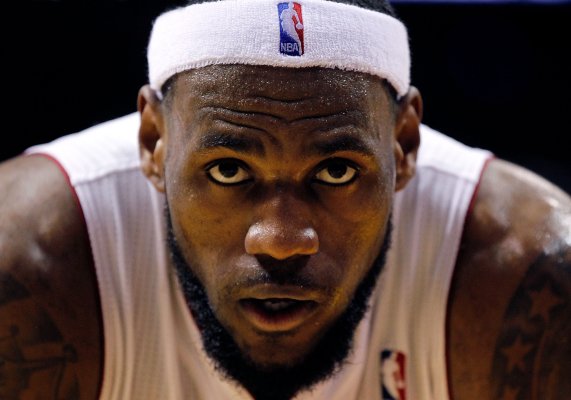 LeBron's Decision Sets Off Tweets of Congratulations and Wizard of Oz Puns
Next Up: Editor's Pick