You Should Worry (a Little) About Falling Space Debris

Clean up your room: A NASA rendering of the low Earth orbit debris field
NASA/JSC
By Jeffrey Kluger

Australia knows a thing or two about getting clobbered by stuff from space. It was in 1979 that America’s out-of-control Skylab space station came auguring in from orbit and scattered its remains across the Australian outback—a story captured by this memorable TIME cover. On Thursday there was a repeat performance, when a truck-sized piece of debris from a Russian rocket streaked across the skies over Melbourne—this time in the era of smartphones, which meant that videos and stills of the fireworks went viral instantly, with all sorts of sky-is-falling commentary.

That, in fairness, is perfectly understandable. There’s no light show quite like an incoming meteor or other hunk of ordnance—equal parts exhilarating and terrifying, depending on the size of whatever’s heading earthward. But we really ought to get used to these events, because there’s no shortage of rubbish in space — and the cosmic junk yard is only growing.

It’s been nearly 60 years since Russia’s Sputnik satellite went into orbit, starting its brief life as the planet’s first artificial moon and ending it as its first bit of space garbage. The satellite itself wasn’t the only piece of rubbish that was involved. Its spent booster fell back toward Earth well before Sputnik reached orbit, but all manner of minor debris—bolts, paint chips and other shards of stuff—made it to space. In the six decades since, those early bits of litter have multiplied exponentially. According to NORAD, NASA and other groups that track space debris, there are at least 21,000 orbiting objects 10 cm (3 in.) or larger currently circling the Earth, at least 500,000 in the 1 to 10 cm range, and more than 100 million smaller than 1 cm. The Union of Concerned Scientists lists 1,167 operational satellites now in orbit—and there may be at least as many dead ones.

All of them, eventually, will have to come home, and that gets people spooked, but it shouldn’t—at least not most of the time. First of all, most satellites will incinerate on their way down, though the bigger a piece of junk is and the denser the materials that make it up, the greater the chance it has of striking the surface. Still, fully 70% of that surface is water and most of the land that’s left is entirely uninhabited or only sparsely so. Yes, a burnt-out satellite falling earthward with central Shanghai in its crosshairs would create a deadly mess, but any one individual’s odds of getting hit (which, like it or not, is how most of us reckon these things) are very low.

NASA’s and NORAD’s continuous surveillance lowers that risk even further by modeling orbits and predicting just which pieces are coming in next, and some websites make it easy for the public to stay up-to-date too. The much greater risk from out of control satellites is not to people on Earth, but to other objects still in orbit. Even then though, collisions are less common than they’d seem. The biggest of the relatively small handful of errors in the blockbuster Gravity was (unfortunately) its central premise, which was that a collision between two satellites had created a high speed storm of debris that was racing around Earth in the same orbit as the shuttle and space station and pummeling both structures on each pass. But orbital physics make that impossible.

All objects in the same orbit move at the same speed, so a collision between them is no more likely than if all of the cars on a highway were moving at exactly 60 mph. The gap between any two would never widen or narrow at all. The moment an orbiting object increases its speed even a little, it climbs to a higher orbit, in the same way a lasso will strain to inscribe a wider circle—and will if you loosen your grip on the rope enough—when you spin it faster. When a satellite slows, it drops to a lower orbit. It’s in those orbital shifts that a collision risk exists.

There’s an even greater danger if two satellites orbiting at the same altitude but at different inclinations—say 23º and 56º above the equator—cross paths. Here the accident is more analogous to a westbound car running a stop sign and colliding with a northbound one in the intersection. Such an accident happened in 2009, when an active American satellite and a defunct Russian one crossed paths 500 miles (800 km) above Siberia.

Both of those ships were utterly demolished—which naturally led to a lot of nervous gulps about what would have happened if one of them had been carrying people, though the same regular satellite tracking that goes on every day would likely allow a crewed ship to take evasive action well in advance. Of greater concern is small debris, the kind that’s way too tiny to see but powerful enough to do real damage. The back-of-the-envelope calculation back in the Apollo days was that a chip of paint moving at orbital speed packs about as much of a wallop as a bowling ball moving at 60 mph (96 k/h), and those physics haven’t changed—and never will. Shielding on big-target structures like the space station helps reduce that risk, though nothing can eliminate it entirely.

Ultimately, the answer, as with any environmental issue on Earth, is for people to quit making such a mess of space and clean up what’s already there. But consider how often we actually follow that straightforward advice on Earth. So again: gulp. 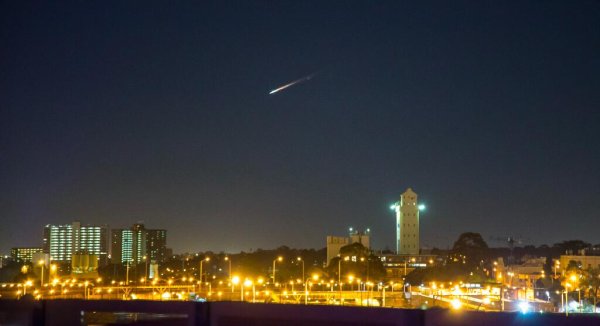