A toddler plays with bubbles during the Pink Dot parade at the Speakers' Corner in Hong Lim Park in Singapore June 28, 2014.
Edgar Su—Reuters
By Charlie Campbell

The Singapore government has ordered the National Library Board (NLB) to remove from library shelves and destroy three children’s books that portray gay, lesbian or unconventional families.

The multi-award winning And Tango Makes Three recounts the real life-inspired story of two male penguins raising a baby chick at New York’s Central Park Zoo. The other two banned titles are The White Swan Express: A Story About Adoption, which features a lesbian couple, and Who’s In My Family: All About Our Families, which describes unconventional parental set-ups.

The move has resulted in a torrent of opposition in mainstream and social media, the latter largely via the #FreeMyLibrary hashtag. An open letter criticizing the ban has also received more than 4,000 signatures.

“This is a very unfortunate step backwards,” Kirpal Singh, associate professor of English Literature at Singapore Management University, tells TIME. “While we try to balance the conservatives and liberal minded, do we remove anything or everything that gives offense, especially if this offense is quite problematic, quite complex?”

According to a NLB statement, “We take a cautious approach, particularly in books and materials for children. NLB’s understanding of family is consistent with that of the Ministry of Social and Family Development and the Ministry of Education.”

The ban was reportedly spurred by a complaint from a single library user who is also a member of the Facebook group “We Are Against Pinkdot in Singapore.”

The NLB boasts a collection of more than five million books and audio-visual materials, and a spokesperson told Channel News Asia that it acts on less than a third of the 20 or so removal requests received each year. (James Patterson’s Kill Me If You Can, which depicts incest, was the subject of a complaint but remains on the shelves.)

Naturally, gay rights activists are outraged. “This unfortunate decision sends a message of rejection to many loving families that do not conform to the narrow father-mother-children definition of family that it has adopted,” said Pink Dot spokesperson Paerin Choa by email. “Pink Dot believes that Singapore can be an inclusive home for its people in all their diversity, and that constructive dialogue should be the way forward for a truly embracing society.”

For Singh, the furor may at least have the positive side effect of prompting debate. “This may contribute to a more vital discussion for Singapore in terms of where we are and where we are not when it comes to values, freedoms and an open state for discourse,” he says.

While praising the NLB as an institution, acclaimed Singaporean author Alvin Pang writes: “This is a serious impoverishment of what books are and what knowledge means, and it can only harm our intellectual development and broader social discourse.”

Justin Richardson, co-author of And Tango Makes Three, would no doubt agree. “We wrote the book to help parents teach children about same-sex parent families,” he told the New York Times in 2007. “It’s no more an argument in favor of human gay relationships than it is a call for children to swallow their fish whole or sleep on rocks.” 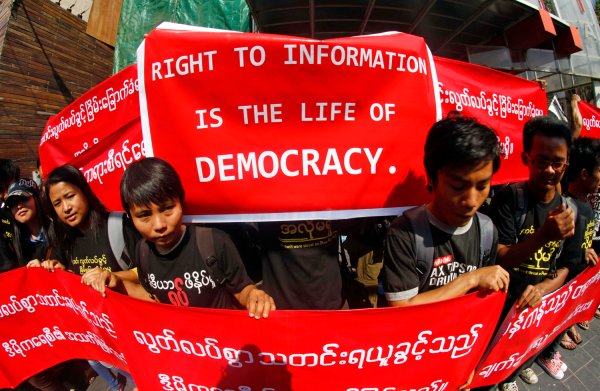 Burmese Journalists Sentenced to a Decade in Prison With Hard Labor
Next Up: Editor's Pick