The Leadership Secret Steve Jobs and Mark Zuckerberg Have In Common

What You Can Learn About Leadership From Jobs And Zuckerberg

We all have imperfections and surrounding yourself with people who can do things you can’t is really essential. If you just look at Zuckerberg, the guy is very, very focused on the product and is probably not particularly great interpersonally. So on one hand you could say, “Oh, he is a flawed person,” but the smarter thing to notice would be, “Isn’t it impressive that he surrounded himself with people who have offsetting skills?”

…I spoke with one of the members of Jobs’ team who worked with Steve almost 20 years — going back to the NeXT days. He said as Steve got older he knew what he could do and he knew what he couldn’t do. He became very good at learning how to surround himself with people who could both implement his vision and could offset the skills that he didn’t have…

What great leaders do is they build a team that enables them to succeed.

…one of the lessons that comes through from Richard’s research is that when you get a team size over five or six, the performance of your team will start declining quickly. Once you get to seven, eight, nine, ten, eleven people, the percentage of time that people spend on coordination issues and maintaining good interpersonal relationships expands dramatically. That becomes the dominant problem in the group, instead of doing the work itself.

There is some evidence we talk about in the book that if you think somebody is a lousy leader and they are in charge of a big team, try cutting it in half and see if your lousy leader becomes a competent leader.

Team Structure Must Adapt To The Situation

In the book you mention a study of World War 2 POW’s that showed survival differences between groups which changed their structure versus those that maintained their prior hierarchy.

God knows how they get these data sets. It was almost every POW held by both Japan and the United States. The question was, did the POW’s put in a strict hierarchical military structure as they always had or did they allow it to be more decentralized? What they found was that in the camps where they changed the structure, allowed decentralization, allowed people to make localized decisions and to have more autonomy and more freedom — that the death rates were considerably lower.

That’s an example of when you have a mindset or set of behaviors that work in one situation, sometimes you have to throw away your tools and do something else. The mindset or perspective you’re using right now, ask yourself if it works in the new situation or for this particular decision.

Great Leaders Focus On The Bad

For a leader to make positive change, the focus needs to be on getting rid of the bad stuff first. When you do that it makes way for goodness to spread…If you don’t get rid of the bad stuff as the first order of business — whether that’s incompetence, stealing, corruption, whatever — then I think that you’re really in trouble.

Getting rid of the bad first was the hallmark of great leaders and we saw that sort of behavior over and over again.

How To Make Better Decisions

To make a decision most people just say “Where do we want to be a year from now? And what stops us from getting there?” Instead, try going “back to the future.” Sometimes they call it a “pre-mortem”. Imagine you already succeeded or you failed.

Imagine it’s 2015 and we failed at rolling out our IT implementation. Just that simple sort of cognitive switch leads people to be much more realistic, and more fine-grained in the analysis of what they need to do.

…I use this myself. I say, “Jeff should I go on this trip?” Jeff always says the same thing, “Okay. It’s three months from now. Imagine you’re there, how do you feel?” Instead of thinking how nice it might be, imagine you’re there and sort of looking back from the future. Gary Klein, the psychologist who has been pushing this, he has studies that show people make better decisions when they do this.

Orbiting the Giant Hairball. It’s one of my favorite books of all time. If you’re trying to be a creative person in a large system, I suggest you read that.

My two dear friends from IDEO, Tom Kelley and his brother David, just had a book come out called Creative Confidence. That’s a great book; just came out.

Creativity Incorporated. It’s by Ed Catmull, who is the President and driving force behind Pixar. He has great advice about how to lead a creative company.

You’ve been teaching MBA students at Stanford for 30 years. What is the best piece of advice you give them? 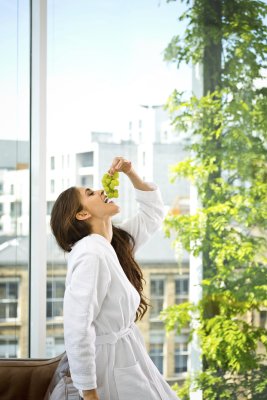 What Is the Good Life? Four Books That Give You Real Answers
Next Up: Editor's Pick