It's Pope vs. Pope in the World Cup Final

The Vatican has cast doubts on a papal soccer party after saying Pope Francis and his predecessor, Pope Emeritus Benedict XVI, probably won’t watch the World Cup final together, the Associated Press reports.

Sunday’s final sees Argentina and Germany go head to head for the trophy but for Argentine Pope Francis, the final’s a little past the 77-year-old’s bedtime.

The Vatican’s spokesman, the Rev. Federico Lombardi, said the Pope normally goes to bed at 10pm local time, an hour after kick off. However, he added that though the Pope isn’t a big sports fan “we’ll see in the coming days” whether the Pope will delay his slumber.

Pope Francis has already promised that he won’t pray for his home team to win. German Pope Benedict is also unlikely to pay much attention, apparently preferring intellectual hobbies over the athletic.

“Both would want the better team to win, without taking sides,” Lombardi tactfully stated.

Nevertheless, social media has already dubbed Sunday’s match “the final of the two popes” and has spawned the hashtag, #holywar.

On Sunday, Argentina and Germany will meet in their third World Cup final. In 1986, Diego Maradona led Argentina to victory, which Germany quickly overturned in the 1990 World Cup final. Despite their history, Germany remains the clear favorite to win. 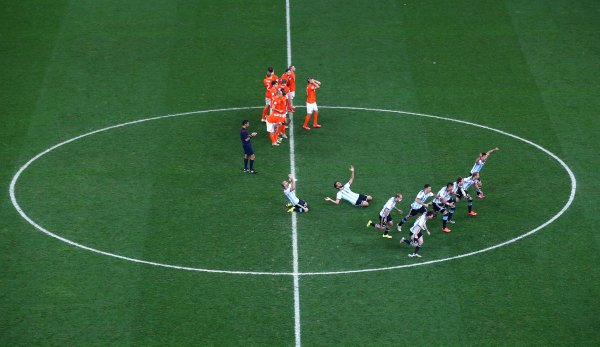 Argentina Will Play Germany in World Cup Final
Next Up: Editor's Pick