Into the Wild Blue Yonder

On Jan. 1, 1914, a flyer named Tony Jannus sat in the pilot’s seat of a biplane capable of taking off and landing on water. Next to him was Abram Pheil, the former mayor of the Florida city of St. Petersburg. Pheil had won an auction with a $400 bid to become the first paying passenger on the 23-minute flight across Tampa Bay. In doing so, Pheil became the world’s first commercial-aviation passenger, inaugurating an industry that has done more than any other to make the world smaller.

I was surprised to learn earlier this year that people had been paying to fly for a hundred years. But perhaps I should have been surprised it took even that long. After all, the first flight took place in 1903 in the North Carolina town of Kitty Hawk, and by 1911 the Italian military had already figured out—during a war in Libya—that planes could be used to drop bombs on people. Ferrying passengers through the skies was the next obvious step.

Jannus and Pheil were on my mind as I drove north from London to Scotland on vacation last month. On one hand, I was grateful—their New Year’s Day journey had marked the birth of an entire industry that now meant that, unlike the last few times I had taken this trip, my bored and frustrated 4-year-old son was not penned in the backseat for the seven-hour drive. He and my wife would be on a flight the next day. What had begun in Florida 100 years ago resulted in my picking up a considerably more relaxed wife and excited son at arrivals at Edinburgh’s airport.

But for many of the more than 8 million people who board commercial flights every day, air travel hardly seems like something to celebrate. Legroom is shrinking, meals are disappearing and flights are becoming more crowded. What must have seemed amazing to the first passengers in the sky can now feel dreary. Unless you can afford a business- or first-class seat—the one area of airline service that is unquestionably getting better—contemporary flying can feel all about the destination, with the journey best forgotten.

So the centenary of air travel marks a challenge for the future: How can the ever growing numbers of air travelers get through the next 100 years of flying with grace and perhaps even a little enjoyment? Some changes on the ground offer hope. Airports are improving all over the world. Last year I flew to two airports—Ben Gurion in Israel and Queen Alia in Jordan—that I used to visit frequently as a reporter but hadn’t traveled to in a while. Terminals that were once little more than soul-crushing sheds had been replaced by pleasant buildings one wouldn’t mind being trapped in for a bit. Grand new airports are being built in China and the Gulf. Even New York City’s much maligned La Guardia—which U.S. Vice President Joe Biden compared to a “third-world country”—is on the verge of a $3.6 billion makeover. Flying itself has never been safer—statistically you’d need to fly every day for 123,000 years before ending up in a fatal crash. And planes are improving with new designs.

But the crowds we encounter in our airports and planes are only going to grow. Last year, we booked 3.1 billion seats on commercial flights. This year that’s expected to climb to 3.3 billion, and to nearly 4 billion by 2017. That growth is a mark of how much more affordable flight has become. But if, as Jean-Paul Sartre said, hell is other people—and I suspect he never endured the special circle of hell that is sitting on an airliner with a 4-year-old kicking you in the back all the way across the Atlantic—then we have little choice but to make peace with life in the increasingly crowded skies.

The trick may be found in the wisdom of the U.S. grunt in Iraq. (Stay with me.) American soldiers serving in the grim deserts of Iraq coined a phrase that remains remarkably helpful for getting through life’s challenging moments: “Embrace the suck.” Translation: the situation is bad, but you have to roll with it. As challenging as modern air travel can be, more people than ever before now have the ability to travel through the skies, visiting foreign countries they’d never otherwise see, reconnecting with friends and family on the other side of the planet. Air travel is no longer glamorous for most of us, but it is still miraculous. That’s why for all the complaints, we’ll never stop flying. The second century of commercial flight has only just started—and this one’s going to be a lot busier. 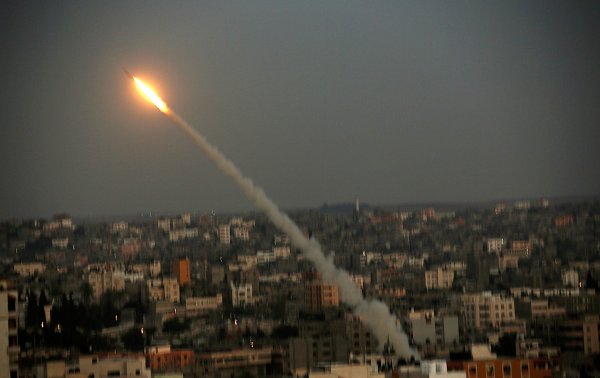 Israel Ramps Up Gaza Offensive
Next Up: Editor's Pick