Coltrane, 18, with Hawke as his father in Linklater’s Boyhood
IFC
By Katy Steinmetz

Shaggy-Haired Richard Linklater, wearing a wrinkled, short-sleeve shirt, is sitting behind a big table in a pristine suite at the Fairmont Hotel in San Francisco. The night before, the director received the same award from the San Francisco International Film Festival that Oliver Stone and Francis Ford Coppola had carried home in previous years. But the free and easy Texan behind the films Dazed and Confused, Before Sunset and School of Rock has also done something that no other director can lay claim to. He managed to make a coming-of-age movie in which the lead actor actually came of age over 12 years of production.

Shot over 49 days from 2002 to 2013, Boyhood, out July 11, is a time capsule in which the passage of years is gently signaled by new haircuts, pop hits and gadgets, as Mason (Ellar Coltrane) grows from a first-grader collecting arrowheads into a college freshman who might not say no to a pot brownie. “I was trying to tell a memory of what it was like to grow up,” Linklater says. “Things you would remember from your past. It was more of a tone, just a series of moments.”

In keeping with that philosophy, the film’s themes are truths that moviegoers will relate to, not escape to: high school love doesn’t always work out; imperfect parents can produce damn good kids; you thought there would be more, and there wasn’t. “It’s the little parts of life, the supposedly boring moments,” says Coltrane, 19, who auditioned for the film in Austin as a 6-year-old. “In reality, I think those are things that do matter–not these big set-piece moments, the things you’re told are going to define you. The first kiss doesn’t really matter that much.”

The 12-year filming span–timed to see Mason start first grade and finish senior year–came with freedoms and constraints. On the plus side, no casting director had to fret about finding a child who resembled the man. But Linklater, after receiving long-term financing from IFC, was faced with the ultimate make-or-break casting choice for his lead. “Who plays the guy? It’s huge. It’s the decision,” he says. The auditions didn’t include a script, partly because there wasn’t one. Instead Linklater spent time with kids and their parents, trying to figure out who could both play his hero at age 6 and help shape the role for the future. He dismissed the little jocks. He dismissed the parent pleasers. Then he met Ellar, a blue-eyed boy with a musician father and a dancer mother. “He wasn’t academic,” Linklater says, “but he was thinking. He’s this mysterious, ethereal, interesting young man. That’s who he was when I met him.”

Each year, a crew of about 45 assembled in Texas to film Coltrane for four or five days. The logistics were dizzying. Producers were constantly juggling schedules. Before and after each shoot, Linklater, drawing on his own youth filled with disillusionment and impatience, fleshed out what Mason would encounter on his arc toward adulthood–a doting mother (Patricia Arquette) who is unlucky in love, a father (Ethan Hawke) who leaves and returns, a lingerie catalog, a first love, a traumatic haircut, a first job. Sometimes the director incorporated what was happening in Coltrane’s life at the time. “I was always attuned to him, kind of the way you would be with a nephew,” Linklater says. “I didn’t want his character to be doing anything he hadn’t already done.”

Those who signed on to the protracted project did so knowing there were risks–that a lead cast member might be in a car crash or that funding might dry up halfway through. And it was essentially filmed live; there were no do-overs or time machines if a shot of young Coltrane was out of focus. “If you lose something, that was it,” says Linklater. “We only had this moment. The ante was always up.” 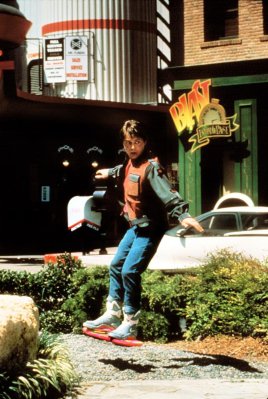 Great Scott! Marty McFly's Hoverboard Is for Sale
Next Up: Editor's Pick