The Students vs. the Unions

Back in 2005, when New York City was pre-crash flush, Mayor Michael Bloomberg offered the United Federation of Teachers a raise in return for 150 extra minutes of classroom work per week. The mayor’s idea was to spend that extra time tutoring the kids who needed the most help–the bottom third of each class. UFT president Randi Weingarten agreed that the group sessions would be small, no more than 10 students per class. Schools chancellor Joel Klein wanted three 50-minute periods per week. The union wanted five 30-minute periods. They compromised on four 37½-minute sessions.

The program was never given a name, which made it easier for New York’s new “progressive” mayor Bill de Blasio to give it back–to eliminate the required 150 minutes of special instruction–in his negotiations with the UFT this spring. You might well wonder why. I tried to find out but received a heaping ration of gobbledygook from a source close to the mayor. He said that the program had been “inflexible” and “one size fits all.” That it was not “workable to the purpose.” Translation: it didn’t work. But how do we know that? No studies or evaluations were done. At his press conference announcing the new union deal, the mayor and his schools chancellor, Carmen Fariña, gave several foggy reasons for the change: the time would be used for additional parent conferences and for “professional development” so the teachers could learn how to teach the new core curriculum. A lot of unspecific wiggle room was negotiated on both counts–part of the mayor’s drive toward “flexibility.”

But flexibility is not a trait often associated with teachers’ unions. The American Federation of Teachers, which Weingarten now heads, calls itself “a union of professionals,” but it negotiates as if it were a union of assembly-line workers. Let’s start with the 37½ minutes, especially that half-minute. What happens if the teacher is in midsentence–or is in the midst of a breakthrough with a student–when the bell rings? A professional finishes the lesson and is paid in personal satisfaction. (I’m sure that the overwhelming majority of teachers do so; these sorts of work rules insult their dedication.) A professional talks to parents whenever and wherever. A professional also doesn’t resist evaluation–but the current New York City union president, Michael Mulgrew, actually bragged that he “gummed up the works” on an evaluation agreement with the far more rigorous Bloomberg administration; de Blasio, of course, hasn’t sought to implement that deal.

The most damning aspect of de Blasio’s giveback is the “didn’t work” argument. We are talking about one of the ground-zero principles of a healthy school system: extra help for those who need it. If the program doesn’t work, you don’t eliminate it. You fix it. The mayor’s spokesman said the extra help would be continued in “flexible” ways. Apparently, “flexibility” is a mayoral euphemism for “I cave.” And given the current atmosphere, if it isn’t specified in the contract, it doesn’t exist. A mayor who actually cared about education would be seeking longer school days, longer school years, more charter schools (which have to be more rigorously monitored) and the elimination of tenure and seniority rules to make sure that the best professionals, not the longest-serving assembly-line workers, are in the classrooms.

Teachers’ unions are suddenly on the defensive across the country. The Supreme Court recently ruled–unfairly, I believe–that some home health care workers did not have to join the union that negotiated their contract. That could have an impact on all public-employee unions. In California, a district court judge recently threw out the state’s tenure rules. In his ruling, he wrote that the widespread protection of incompetent teachers “shocks the conscience.” A group called the Partnership for Educational Justice, which is led by former CNN anchor Campbell Brown, is filing a similar suit in New York and promises to take the movement national. Brown’s group has hired Robert Gibbs, the former Obama press secretary, to run its communications strategy; other Obama stalwarts will soon join the effort as well. Obama’s Secretary of Education Arne Duncan praised the California decision, which caused the National Education Association, the country’s largest teachers’ union, to call for him to be fired.

All of which raises an old labor-movement question for Democrats in 2014 and 2016: Which side are you on? Competent teachers should certainly be paid more, but the protection of incompetence is a national scandal, as is the unions’ resistance to teacher evaluations and charter schools, as is the quiet undermining of educational creativity by eliminating special programs for needy students. The Obama Administration has clearly edged away from the unions’ excesses. But what about the rest of the party? Which side are they on: the students’ or the unions’? 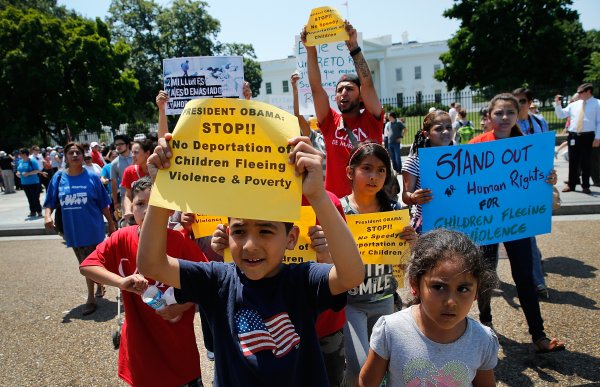 Evangelicals Must Take the Reins on Immigration Reform
Next Up: Editor's Pick