The words "With the Syrians" are displayed on the Eiffel Tower in Paris on March 15, 2014, in support of Syrians on the third anniversary of the conflict that has claimed more than 140,000 lives. On July 9, 2014, French police revealed transcripts of encrypted messages from a French jihadist who planned to target the Eiffel Tower and other French landmarks.
Benoit Tessier&mdash;Reuters
By Melissa Hellmann

A French jihadist was plotting to bomb renowned Paris tourist attractions such as the Louvre and the Eiffel Tower, according to intercepted messages he sent al-Qaeda operatives revealed on Wednesday.

A 29-year-old butcher of Algerian descent, only known as Ali M, was sending encrypted emails to a senior member of al-Qaeda in the Islamic Maghreb (AQIM) for over a year, reports the French daily Le Parisien.

When Ali M was asked how he would “conduct jihad in the place you are currently,” he suggested targeting nuclear power plants, several landmarks including the Eiffel Tower and “cultural events that take place in the south of France in which thousands of Christians gather for a month,” the Telegraph reports.

“The main walkways become black with people and a simple grenade can injure dozens of people, not to mention a booby-trapped device,” he said.

AQIM suggested that the butcher receive training in military techniques in the desert of southern Algeria prior to undertaking the attacks, but French officers detained him in June 2013, one week before his planned departure. Authorities then set about decoding the encrypted messages.

Ali M’s lawyer, Daphne Pugliesi, told Le Parisien that the butcher had been recruited and brainwashed by AQIM and that his “arrest has been a relief for him.” Ali M is still detained and awaiting trial for “criminal association,” according to France 24.

The transcripts were revealed as France’s Interior Minister Bernard Cazeneuve attempts to build support for controversial new antiterrorism legislation that would prevent French nationals from traveling abroad if they are suspected of joining the wars in Syria or Iraq. The bill would also crack down on jihad-recruitment efforts online.

Authorities say that 800 French nationals have already gone to Syria since the start of the conflict in March 2011; many have either returned to France or are planning to do so in the future, Radio France Internationale reports. 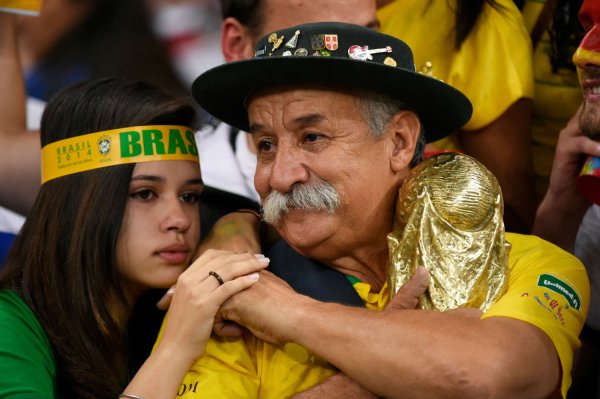 Brazil Moves From Sadness to Acceptance in Its World Cup Loss
Next Up: Editor's Pick