Colorado Is Consuming Way More Pot Than Anyone Ever Believed

Hundreds of people lit up joints, bongs, pipes and marijuana cigarettes at exactly 4:20 p.m. during the Colorado 420 Rally at Civic Center Park in Denver on April 20, 2014, to celebrate the legal use of marijuana in the state.
Helen H. Richardson—Denver Post via Getty Images
By Maya Rhodan

About 9% of Colorado’s population consumes marijuana, according to a market demand study conducted by the state department of revenue’s Marijuana Enforcement Division and the state’s Marijuana Policy Group. And those users, it’s estimated, will get through about 121.4 metric tons of pot every year.

The state’s Marijuana Enforcement Division analyzed the market demand for the drug, which Colorado began selling for recreational use in January, in an effort to “effectively manage production within the regulated industry,” according to a press release.

According to the study, published Wednesday, the bulk of the demand for the drug comes from the most frequent users. About 21.8% of users report consuming marijuana almost daily, accounting for 66.9% of the total demand in the state. That constitutes a lot of consistent tokers. Across the country, only 17% of American adults consume marijuana that frequently, according to the National Survey on Drug Use and Health.

About 29.2% of adults report smoking less than once a month in Colorado.

But it looks like Coloradans aren’t the only ones getting Rocky Mountain high. Using sales-tax analysis and data from tourist offices, the study’s authors estimate about 44% of all retail sales of marijuana come from tourists — the bulk of whom visited mountain communities. In all, visitors are expected to consume about 8.9 metric tons of pot per year. 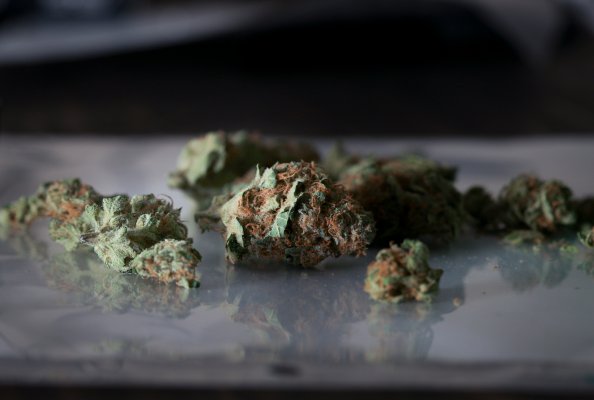 Colorado Sells More Than 10 Tons of Pot Each Month
Next Up: Editor's Pick