Study: Most Millennials Would Dump a Friend to Get Ahead at Work

On top of accusations that millennials are narcissistic and lazy, the generation now has a new criticism to address: They’re more likely to ditch work friends for the sake of a promotion, according to a recent LinkedIn survey.

But those warm and fuzzy feelings don’t necessarily translate into coworker loyalty. When asked whether they would sacrifice a work friendship for a promotion, 68% of millennials said they would while 62% of boomers said they would never even consider it.

“It’s a positive difference as far as I’m concerned,” Nicole Williams, a LinkedIn Career Expert, told TIME. “Ultimately, [millennials] feel that these friendships will either survive or there will be new friendships…I think there is a sense of competitiveness and that you need to be competitive in order to survive.”

Williams also said that the results could be affected by millennials’ expectation that they will work for several companies across their careers. “If you thought you’d be sticking around for 20 years, I think you’d be more conscious in terms of your relationships,” she says.

Boomers are also more likely to have started families of their own, while Williams suggests that millennials—fresh out of college and in a new environment—search for that closeness in their office relationships. “You’ve got boomers who have kids, who have husbands, parents they’re taking care of. They’re not as interested in the more social aspects of work,” Williams says. “For millennials, their professional relationships are kind of an extension of their family in a lot of ways.”

The idea of a “work spouse” comes to mind, a coworker possibly of the opposite sex with whom you share a platonic but extensive friendship because of a shared understanding in the work you do. Williams credits this very concept to the millennial generation. “Even the word ‘work spouse’ didn’t exist ten years ago, and I’m certain that the boomer generation wouldn’t conceive of their professional relationships being comparable to their partner, marriage relationships,” she said. “But you hear it all the time within this millennial generation.”

Still, knowing that many millennials would gladly ditch their work hubby for a shot at the corner office may leave a bad taste in some people’s mouths. Williams’ explanation for this trend is concise: “[Millennials] are using these friendships to advance themselves professionally,” she says. 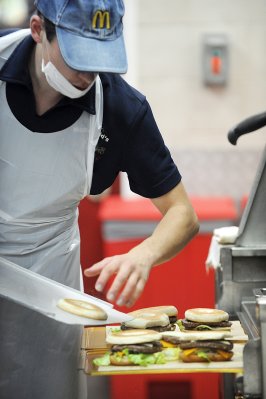 That Lousy Summer Job Can Help Kids Get Ahead
Next Up: Editor's Pick