Richard Linklater has said that “not much” happens in Boyhood, his new movie about a dozen years in the life of a Texas family. The biggest shock, though not unexpected, is when the leading man’s voice changes. Leading boy, really. We’ve been watching Mason (Ellar Coltrane) since he was an adorable six, and the onslaught of puberty strikes us as forcefully as it does him. Our little boy is becoming a young man.

Linklater’s gimmick — actually, his genius — was to visit the same core cast of fictional characters, played by the same actors, for a few days each year. Rounding up Lorelei Linklater (his own daughter) as Mason’s elder sister Samantha, Patricia Arquette as their mom Olivia and Ethan Hawke their dad, Mason Sr., the writer-director began in the summer of 2002, when its star actor was turning six, and concluded last autumn, when Mason is shown going off to college. Linklater eventually distilled these dozen years into a 160-minute movie that spends 10 or 15 minutes on each year. You might wonder if he made a 12-hour director’s cut for DVD release; he didn’t. But the seasons pass so fluidly, with Mason and Samantha maturing before our eyes as if through gentle time-lapse photography, that the movie could be much longer to afford the audience the pleasure of spending more time with people worth caring for.

(READ: Katy Steinmetz reports on the making of Boyhood)

That’s the seductive magic of Boyhood. Watching it gives viewers a protective, possessive feeling about Mason. We have the intense rooting interest of surrogate parents, or doting aunts and uncles on an annual family reunion. We hope that Mason will survive his mother’s broken marriage and later involvement with other men. We want him to grow out of that bad haircut, overcome his siege of acne, emerge intact from the heartbreak of first love. A home movie of a fictional home life, an epic assembled from vignettes, Boyhood shimmers with unforced reality. It shows how an ordinary life can be reflected in an extraordinary movie.

Films marking the development over the years of a single young character usually employ different actors at different ages, as Maleficent does for the child and teen gestations of Angelina Jolie. Among the very few notable exceptions is François Truffaut’s 1959 The 400 Blows, which focused on the restless 14-year-old Antoine Doinel, and grew into a five-film series spanning 20 years, all starring Jean-Pierre Léaud; it’s available in the Criterion DVD set The Adventures of Antoine Doinel. One unique documentary project, Michael Apted’s Up series, has traced the separate lives of about a dozen English people every seven years, from school kids in 1964 (Seven Up!) to late middle age in the most recent installment (56 Up).

In fiction films, though, directors can’t wait years for their young actors to grow up; most pictures need to be finished yesterday. Who would gamble on a first-grader’s star quality, his sheer screen watchability, that can be sustained and enriched until he’s a college freshman? Linklater — who also hatched the same-time-next-decade romantic trilogy, with Hawke and Julie Delpy, that was capped last summer by Before Midnight — took that risk with the young Coltrane. And no, he didn’t sign the six-year-old to a 12-year movie contract; reenlistment was voluntary. “My hope,” the filmmaker told The New York Times, “was that his parents and him would see this as a positive thing in his life and a fun thing to be involved in every year.”

A beautiful child who goes on to endure a naturally gawky phase and grows up to resemble a slimmer, much taller Peter Dinklage, Coltrane has the gift of visible introspection; the subtle play of his face provides a window into Mason’s mind. As his sister, Lorelei Linklater is a natural showboater with preternatural poise; her closest pop-culture sibling would be Mad Men’s Sally Draper (always played by Kiernan Shipka), who in the show’s seven years has sprouted from a lovely six-year old into a willful teenager. Arquette ages as well, puts on a few pounds and persuasively inhabits a woman fighting for her own identity and finally locating it as a child psychologist. And Hawke, who has appeared in nine of Linklater’s 16 fiction features, plays fair with Mason Sr. — a man who creates a new family while trying to keep unbreakable ties with the one he left.

Since no title cards establish each new year, viewers must infer the period from references to Fallujah (2003) or the publication of the sixth Harry Potter book (2005) or the 2008 Presidential campaign, when Olivia recklessly has her kids plant Obama material on neighbors’ lawns. Gradually you learn to go with the flow, and to enjoy the privileged moments as they unfold: a bowling date or a camping trip or an Astros game (Roger Clemens manhandles the Brewers) with Dad; a conference with a sympathetic high-school teacher that points Mason toward pursuing his love of photography. The brief scene of Mason in class pledging allegiance to the Texas flag underlines the 53-year-old filmmaker’s affinity to his home state, where he shot his first two features, Slacker and Dazed and Confused, before following the elaborate itinerary of his later films.

Olivia is no globetrotter. Though she moves her family from one Texas town to another, she feels cramped by having gone directly from being “somebody’s daughter” to being “somebody else’s f–king mother.” This woman needs a man, usually the wrong one. After her break with the kids’ dad she marries Professor Bill (Marco Perella), whose geniality masks an alcoholic belief that his new wife and stepchildren are his students, and his home a classroom that becomes a prison. He’s a horror — providing the film’s one potent flourish of domestic melodrama — but Mason would probably prefer his real dad to any pretender his mom hooks up with. “Why’d you even marry him?” the young Mason asks his mom about Professor Bill. Later, as a teenager, he tells Mason Sr. that he wishes the parents, whatever their abrasions, had stayed together. “It would’ve saved us from a parade of drunken assholes.”

Mason’s life has its difficulties but few extremities; it unfolds rather than exploding in reality-TV’s manufactured traumas. To sit through Boyhood is to page through a family album of folks you just met, yet feel you’ve known forever. Each picture tells a poignant story. In the first year, Samantha tries to entertain or annoy her kid brother with her grinding rendition of “Oops!… I Did It Again.” Before leaving the home he grew up in, Mason applies paint to cover the pencil marks measuring the heights of him and his sister. After Professor Bill insists that Mason get a buzz cut, the boy is humiliated — until he reads a note passed from a pretty girl in his class: “I think your new hair looks kewl.” Poor, wistful Mason: he might be any of the Texas boys raised by a tough dad (Brad Pitt) in Terrence Malick’s The Tree of Life.

(READ: The cinematic vision of Terrence Malick’s The Tree of Life)

At one family gathering we’re startled by the presence of a mother and daughter we last saw seven or eight years earlier (about an hour in screen time), befriending Olivia at a critical moment. For being there when Olivia when she most needed them, and for staying in her life, these two women deserve a big hug of gratitude. For his 17th birthday, Mason receives plenty of hugs and several presents: a 12-gauge shotgun and a red-letter Bible from his mom’s folks, and from Mason Sr. a personally mixed “Black Album” of songs by Beatles members after they left the group. Dad’s mighty proud of that gift, but what Mason really hoped for was the battered old GTO his father had offhandedly promised to give him when the kid was old enough to drive. Dad forgot about that.

Parents forget; kids remember. Or is it the other way around? We all recall what is or was important to us, and are astonished when it slips other people’s minds. Perhaps we dismiss as irrelevant matters of crucial concern to those we love. That’s life as most of us experience it, and which few movies document with such understated acuity as Boyhood does. Embrace each moment, Linklater tells us, because it won’t come again — unless he is there to record it, shape it and turn it into an indelible movie. 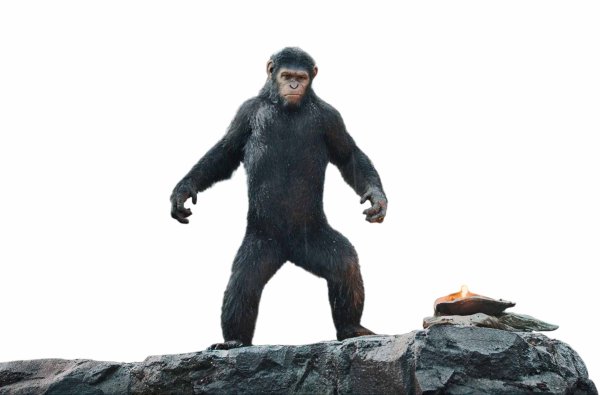 Ape-ocalypse Now in Dawn of the Planet of the Apes
Next Up: Editor's Pick