A match’s opening period is dicey for analytical purposes. It usually can’t be analyzed too thoroughly because teams may settle in slowly or make tactical adjustments to respond to an opponent. Not so much for Germany on Tuesday.

Germany needed very little time to acclimate to its World Cup semifinal, demolishing Brazil 7-1 after a strong first 30 minutes, which included five goals in an 18-minute span for the ages.

Germany controlled the match through calculated, choreographed pressing in its front block, as well as targeted ball movement in possession. The style wasn’t too surprising, considering the pressing emphasis in the Bundesliga recently, with Jurgen Klopp’s gegenpressing at Borussia Dortmund and Pep Guardiola’s system at Bayern Munich.

The magnitude of the result, though, will be shocking for decades to come, especially because Brazil was on the front foot in the first five minutes, winning a corner kick within 60 seconds of kickoff. Germany fired warning shots in transition, and after riding the initial chaos of Brazil’s energetic start, it put Brazil in a stranglehold.

Germany’s main defensive posture was a 4-1-4-1 medium block, drawing its line of confrontation just above the center circle. Brazil couldn’t build out of the back, playing long balls into the strong German defense or over the touchline. An inability to create was a constant theme for Brazil this tournament, minus Neymar’s individual brilliance.

The fourth German goal resulted from Khedira and Kroos’ direct central pressure, as Dante played a poor short pass to Fernandinho, who had his back to the field and no outlet. That was the only first-half goal that came from the middle, as the other four were created wide.

Germany’s first good chance was in the seventh minute, exploiting the space Marcelo vacated when he bombed down Germany’s right flank. With Thomas Muller and Philipp Lahm running the channel and Mesut Ozil tucking in from the left, Germany built 53 percent of its attacks down the right.

The corner kick that led to the first goal also came from using the space Marcelo conceded. He could only recover and knock the ball out for a set piece. As Brazil scrambled to regain defensive positioning in transition, the player on the ball in that wide space had an array of options.

This is where the analogy of football as chess comes in. Rehearsed team movements cause reactionary movements in the opponent, leaving spaces to attack. Germany created seven scoring chances in the first half hour to Brazil’s zero, mainly through Khedira and Muller down the right.

The Germans looked for a vertical initial ball to catch overlapping players in transition. In instances where that was nonviable, they built up through short passes and quick movements.

Despite having clear control of the match, Germany never maintained the majority of possession statistically. It was a pragmatic approach that kept the ball away from Brazil’s top block and allowed square passes by Brazil’s defenders that led to nothing.

On the second, Muller ran in from his wide starting position, slashing through the back line to create a central opportunity. Marcelo kept him onside as the only Brazilian defender inside the penalty area, and Klose was on hand for a simple layoff, as he was behind the ball but ahead of the center backs.

Marcelo struggled defensively all night, a product of his focus on getting forward too high and too early. Germany exploited him as the weak link in the back four, and Brazil never adjusted despite facing similar attacks the entire first half-hour.

On Germany’s third goal, two more typical elements of a possession system emerged: a central overload and playing between lines. Ozil moved to create a 5-on-3 advantage in the middle, and Lahm overlapped on the right.

Muller stayed between Brazil’s holding-midfield block and defensive line from build-up to finish, constantly looking over his shoulder to check his positioning in respect to his opponents’. Nobody tracked his run, and although he whiffed his shot at the top of the penalty area, Toni Kroos made a similar movement just behind him and finished emphatically.

The team-first emphasis and selflessness in this German attack is strongly reminiscent of Spain in the height of its golden generation that crashed to earth this World Cup. Players interchange effortlessly and pass fluidly — such as on Germany’s fifth goal, capping 30 minutes of misery for Brazil — rather than go for glory alone.

It should come as no surprise with six Bayern Munich players in the lineup that Germany’s emphasis on organized pressing and fluid play between opposing lines is Guardiola-flavored, possession-based football at its best.

Germany has always been difficult to beat on the big stage; Tuesday’s performance was anchored in a typically detail-oriented tactical approach. However, the particulates of this German machine are meshed with tiki-taka characteristics to give the team a tilt toward a more flexible Spanish style of play.

In a lot of ways, Joachim Low has created an evolution of Vicente del Bosque’s dominant force from much of the last decade. Kickstarted by Jurgen Klinsmann after Germany’s embarrassing winless group stage at Euro 2004 and fine-tuned by Guardiola coaching the majority of the team’s starting lineup all club season, this is perhaps what Germany needed to take the next step for the first time in 24 years and win another World Cup.

The most obvious holdover characteristic from great past German teams is this group’s winning mentality, also seen in the early 4-0 destruction of Portugal and in resilient performances against scrappy challengers the United States and Algeria.

When Brazil finally scored Tuesday, in second-half stoppage time while facing a 7-0 deficit, Neuer slapped the ground in frustration. Schweinsteiger openly berated Ozil for missing an obvious chance moments before conceding. That goal was all that stood between Germany and perfection in Belo Horizonte, a shutout the only flourish missing from a cold, ruthless machine’s devastation of a pressure-laden team collapsing under the weight of its own emotional expectation.

GALLERY: Brazil’s Having a Bad Day 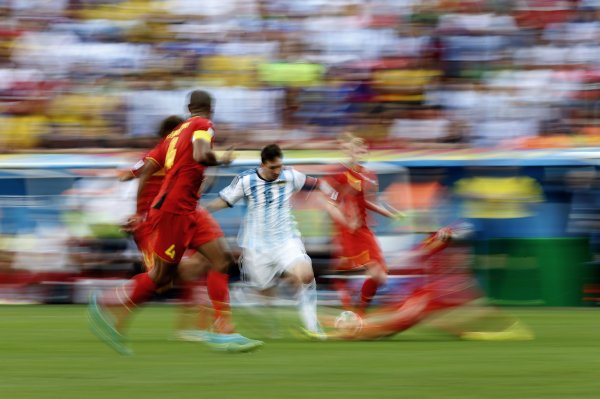 Messi in Motion: All Eyes on Argentina's Star Striker
Next Up: Editor's Pick