The World's Third Biggest Democracy Is in Political Limbo

Initial counts by early evening on Wednesday gave the populist governor of Jakarta, Joko Widodo, popularly known as Jokowi, around 52% of the vote. His rival, former army general Prabowo Subianto, received about 48%.

Official results are not expected until July 22, meaning that the world’s third largest democracy — and most populous Muslim nation — will be in political limbo for the next two weeks. Outgoing President Susilo Bambang Yudhoyono has appealed for both sides to show restraint and not to celebrate with mass rallies until the General Elections Commission releases the final tally.

Nevertheless, Jokowi supporters celebrated what they consider his victory with a huge gathering at the Welcome Statue in Jakarta’s central business district and a smaller one at the Proclamation Monument in downtown Jakarta before the breaking of the Ramadan fast on Wednesday night. The latter site, where the country’s founding fathers Sukarno and Mohammad Hatta declared independence, is an emotive one for Indonesians. “Today a new history has been made, a new chapter for Indonesia,” Jokowi told the crowd that had gathered there. “This is a victory for the people of Indonesia.”

In a bid to defuse tensions, President Yudhoyono, whose party endorses Prabowo, met the two candidates at his private home outside Jakarta on Wednesday night. At the center of contention are the polling firms — almost a dozen of them — that have done the quick counts, since many pollsters are known to be either affiliated with or even held on retainer by different candidates. However, political analysts say the half-dozen or so firms that give Jokowi a lead not only show a similar margin of victory for him, but also correctly predicted the results of the legislative elections in April.

“We can safely conclude that the quick counts from CSIS, SMRC and others predicting a Jokowi victory are right,” said Aaron Connelly, East Asia fellow at the Sydney-based Lowy Institute for International Policy, who focuses on Indonesia’s politics. In contrast, he says, quick counts that give Prabowo victory “are all over the place, which suggests they have been manipulated to produce a certain result.”

In a blow to the credibility of Prabowo’s camp, an executive at polling firm Poltracking Institute said on Wednesday night that in order to “maintain professionalism” the firm had canceled its agreement to work with tvOne — a station owned by Prabowo backer and Golkar Party chairman Aburizal Bakrie.

Poltracking’s results put Jokowi as the winner, but tvOne and other stations owned by Prabowo’s coalition supporters — like Hary Tanoesoedibjo’s RCTI and Global TV — have only broadcast quick counts from pollsters that give Prabowo victory.

It is unlikely that Prabowo (who said in an interview that “losing is not an option”) will concede anytime soon — even, says Connelly, “if it would be better for stability, the markets and the country’s welfare.” If Prabowo is still unhappy with the electoral commission’s official count later this month, he could challenge it in the Constitutional Court. That means Indonesia won’t know for sure who its next leader is until late August.

In the meantime, the situation remains fraught. With paramilitary groups like the Pancasila Youth and the Islamic Defenders Front supporting Prabowo’s presidential bid, there are fears that a hitherto peaceful election process could degenerate into violence.

“I pray whoever loses will behave like a statesman and accept his defeat because elections are the people’s voice,” said pro-Jokowi activist Nong Darol Mahmada on Twitter. 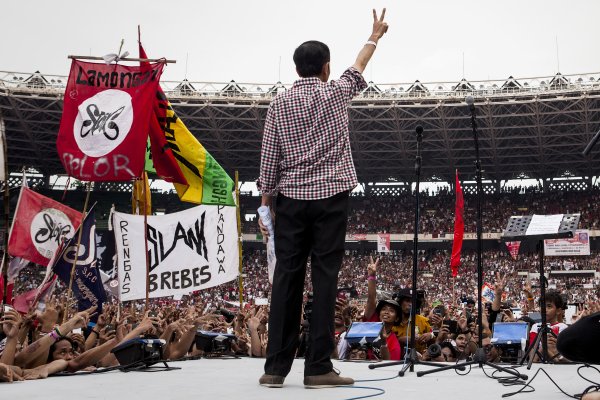 Indonesia Will Decide Its Political Future
Next Up: Editor's Pick