A man shows his mobile phone while riding the Bangkok sky train on May 28, 2014. A widespread Facebook outage occurred in Thailand one afternoon while the ruling military junta who staged a coup denied causing it.
Paula Bronstein—Getty Images
By David Stout

Thailand’s ruling junta set another disturbing precedent over the weekend after arresting a magazine editor in retaliation for comments he published on his Facebook page on July 4.

In his message, Thanapol Eawsakul, the editor of Fah Diew Khan magazine, said that military authorities had instructed him to refrain from making critical remarks about the junta. He was taken into custody the following day by soldiers clothed in civilian attire.

This is the second time Thanapol has been taken into custody since the army seized power from the country’s caretaker government in late May. He is expected to be held in “administrative detention” for at least seven days.

“Arresting an editor for a Facebook criticism of military rule shows just how far the junta will go to silence critics,” Brad Adams, Asia director at Human Rights Watch, said in a statement. “The military can neither arrest all critics nor wish them out of existence.”

Fah Diew Khan is largely associated with the country’s Red Shirt movement, which supports the popularly elected government of Yingluck Shinawatra that was removed from power during the coup.

In a barely disguised display of media favoritism, the junta appointed the chairman of Post Publishing, which owns several periodicals that reportedly have strong ties to Thailand’s ruling class, to the 10-member advisory board it set up days after the coup.

Since seizing the reins of power, the military has relied on the interment of protest leaders, politicians, analysts and journalists critical of their policies to smother dissent.

On May 28, the junta briefly suspended access to Facebook before quickly reinstating the connection. While the military later denied blocking Facebook, a spokesperson from Norwegian telecommunications firm Telenor, which operates the second largest network in Thailand, admitted that the firm did so for one hour after being instructed by Thailand’s National Broadcasting and Telecommunications Commission. 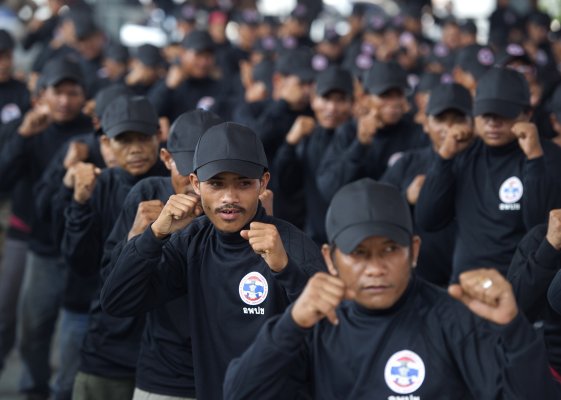 If There's Going to Be a Thai Civil War, Isaan Will Be Its Front Line
Next Up: Editor's Pick