Mick Jagger Is Being Blamed for Brazil's World Cup Thrashing

Brazil fans hold up a poster of Mick Jagger during the World Cup semifinal match between Brazil and Germany in Belo Horizonte, Brazil, on July 8, 2014
Chris Brunskill Ltd/Getty
By Stephanie Burnett

Mick Jagger has an abysmal record at the World Cup. Not simply because the Rolling Stones singer supports his national side — the perennially disappointing England — but because he has developed a reputation for jinxing any team he supports. And after the 7-1 thrashing Germany unleashed on Brazil, he has ensured that his legendary curse will go down in history — at least in the eyes of Brazilians.

The legend of Jagger’s Jinx began in South Africa during the 2010 World Cup, where he attended matches to support England, the U.S. and Brazil in separate games — and saw all of them defeated. Brazilians supposedly blamed Jagger for their 2010 loss to the Netherlands on a Brazilian shirt he wore.

When the World Cup kicked off in Brazil, locals were understandably anxious to ward off Jagger’s bad mojo. He was nicknamed Pé Frio — literally “cold foot,” which is used to describe a person who brings bad luck.

With the Rolling Stones on tour during the group stages of the World Cup, soccer fans hoped he would be too distracted to do any harm. But, as AP noted in a report dated June 25, this was not to be realized:

Finally, Jagger turned up in Belo Horizonte for the semifinal to cheer on the host nation with his Brazilian son Lucas. Despite wearing an England cap, Pé Frio sat down to witness, along with thousands of dismayed fans of the yellow and green, reportedly the worst home loss ever in Brazilian soccer as well as the most one-sided defeat in a semifinal game in World Cup history. When it comes to soccer, Jagger just can’t get, or give, no satisfaction. 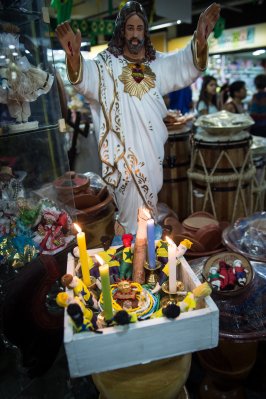