Harry Potter Characters: Where Are They Now?

If you haven’t the time to read all 1,500 words of Skeeter’s breathless dispatch, here’s a quick guide to where your Potter favorites are today — and a little commentary on what characters she left out might now be up to:

It turns out that Harry is not quite a millennial. The famous wizard is on the cusp of his 34th birthday and his hair is actually showing signs of gray. (Why, JK? Why?) Potter has two young sons, James (after his father) and Albus (after Dumbledore), and —according to the Deathly Hallows epilogue— a daughter named Lily Luna. His marriage to Ginny is intact, although his face shows signs of fresh struggle. Potter has an ambiguous scar over his right cheekbone that he got while working in the Auror department of the Ministry of Magic.

Ron Weasley:
Rowling has proven that her characters really can’t have it all in the hair department. According to the article, his “”famous ginger hair appears to be thinning slightly.” But at least he is still happily married to Hermione with two kids, named Hugo and Rose. While Ron began his career with BFFL Harry in the Ministry of Magic, he now co-manages his brother Geoge’s wizarding joke shop Weasleys’ Wizard Wheezes. He also shows “no obvious signs of mental illness,” so that’s good.

Hermione Granger:
Unsurprisingly, Hermione kept her last name and acts as the Deputy Head of the Department of Magical Law Enforcement. The mother of two also has to answer annoying media questions about work/life balance (and perhaps immigration law?). Even witches have to Lean In, I guess.

Ginny Potter (Nee Weasley)
Too old for nicknames, Ginerva is a journalist covering the Quidditch World Cup at the Daily Prophet. Start tweeting, media scene. She’s just like us.

Viktor Krum:
Still a Bulgarian seeker. Still friends with Harry. And our guess is that he is still in need of a good pair of tweezers.

Neville Longbottom:
Neville became a popular Herbology teacher at Hogwarts. He is married to a woman named Hannah, who is rumored to be on the hiring track as a Matron at Hogwarts. They lived above the Leaky Cauldron and like a good Ogden’s Old Firewhisky every now and then.
Editor’s Note: Neville may also do light modeling when Hogwarts is on break because LOOK AT HIM:

Luna Lovegood:
Luna Lovegood married Magizoologist Rolf Scamander, whose father Newt wrote Fantastic Beasts and Where to Find Them. We wish them well on their hunt for Crumple-horned Snorkacks. They have twin sons.

Percy Weasley:
Percy is the Head of the Department of Magical Transportation. Obviously.

Bill Weasley:
In spite of scarring from a werewolf encounter, he married Fleur Delacour. They have a beautiful daughter named Victoire who likes making out with Harry’s godson Teddy Lupin.

But of course, Rowling couldn’t get to all of our favorite characters. Here is our own fan-fiction guess at what some unmentioneds are up to right now (with apologies to Rowling):

Dudley Dursley:
Dudley is currently nursing a minor credit card debt due to excessive Candy Crush habits and Type 2 diabetes due to excessive candy eating habits. On the bright side, however, his temperament has improved and Harry is on the family Christmas card list.

Draco Malfoy:
Malfoy is married with children and works as the head of a ethically precarious division of Gringotts Bank. His robes are always perfectly tailored and monogrammed.

Cho Chang:
Cho is a defense against the Dark Arts tutor.

Molly Weasley:
The grandmother of 12 has a booming Etsy business for her knitting.

Rita Skeeter:
Rita will be a “journalist” until the very end. Although the Daily Prophet gossip columnist is currently under investigation for wand tapping. 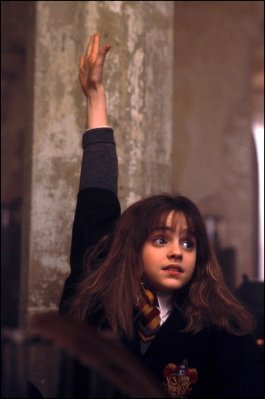 Can Hermione From Harry Potter 'Have It All'?
Next Up: Editor's Pick