Here's Why So Many Drone Pilots Are Getting in Trouble

If you want to see some spectacular video footage, do a quick YouTube search for images captured by drones and marvel at the one-of-a-kind perspective they can deliver. But keep in mind that whoever captured that footage currently blowing your mind could be in serious trouble for breaking aviation laws.

After a series of videos showing what it looks like to fly through a fireworks display vent viral this Fourth of July weekend, the Federal Aviation Administration said Monday that flying drones for fun doesn’t require the government’s go-ahead, but cautioned that “hobbyists must operate according to … the law.”

Many enthusiasts have so-far ignored such warnings, evidenced by Monday’s arrest of two New Yorkers who allegedly flew their $1,000 drone too close to the George Washington Bridge — so close, in fact, that a police helicopter pilot felt the drone endangered his full-size chopper, according to the New York Daily News. The police pilot said the drone was flying at an altitude of 2,000 feet– well above the FAA’s 400-foot ceiling for drones.

Stories about drone pilot arrests and fines have become almost commonplace. What’s not new is flying radio-controlled model aircraft — probably a better term for the “drones” most of these hobbyists are flying. That has been a popular hobby for decades. Why, then, does it seem like so many R/C pilots are suddenly brushing up against the edges of the law?

Learning to build and fly R/C aircraft was once a time-consuming, arduous process, factors that kept the hobby from spreading. Now, new technology like user-friendly quadcopter designs, equipped with smaller, high-powered motors and batteries, means that pilots can have their aircraft ready to go in minutes instead of days, greatly enhancing the appeal of the hobby. And while the old-school pilots often met in clubs, which enforced flight rules as a social norm, the newbies are buying their gear off Amazon and heading out solo.

But the real issue here is that many of the new designs come with cameras attached, a feature that has fundamentally changed why people fly model aircraft. Though some old-school R/C aircraft hobbyists experimented with DIY digital camera hookups, they mostly viewed building and flying their aircraft as the endgame of their project. They generally avoided risky flying, as that could cost their club permission to use the local park, or could damage their expensive, intricate model aircraft that took hours to build.

The new wave of hobbyists see their GoPro-equipped drones less as remote-controlled aircraft and more as flying cameras, set to embark on a cinematic adventure. Flying for the sake of flying is no longer the point — the point is getting awesome YouTube footage, which leads to riskier behavior.

After all, the FAA’s rules ban, for example, flying a drone higher than 400 feet — but wouldn’t that 500-foot bridge make for a killer shot? There’s an economic incentive at play here, too — get popular enough on YouTube and you can make millions or get hired to shoot big-budget Hollywood films.

So while the FAA’s rules may have been fine for the old-school flyers, the new class has a lot to learn about what’s safe and what’s not. Adding to the confusion is the fact that what the FAA permits is in a state of flux. Without a doubt, there may always be a segment of rebellious flyers who will keep buying camera-equipped drones and flying them outside the bounds of the law, criminal charges be damned. Still, the new wave of drone-cinematographers would do well to look at the recent arrests, investigations and near-accidents as proof that flying legally while advocating for their preferred rules is better than breaking the law and flying dangerously to rack up the YouTube views. 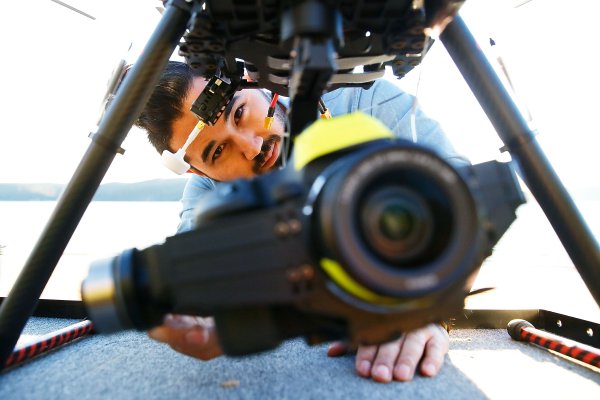 The Best Drone Videos From Around the Web
Next Up: Editor's Pick