Israel called up 40,000 reservists to bolster its threat of a ground offensive in the Gaza Strip on Tuesday, even as it said it hoped its quick move to arrest the Jewish extremists charged in an apparent revenge killing would lower the temperature. But the arrests appeared to do little to quiet the protests that have engulfed Israel and the West Bank in the week since the murder of a Palestinian boy.

“We worked immediately to find the perpetrators,” Prime Minister Benjamin Netanyahu told the boy’s father in a phone call on Monday. “They will be tried and brought to justice.”

Still, uncertainty reigned Tuesday, a week after the killing of Muhammad Abu Khdeir—said to be crime of vengeance for the murder of Jewish Israeli teens buried just hours earlier. One clear reason is “Operation Protective Edge,” the offensive Israel launched Monday night in the Gaza Strip and threatened Tuesday to escalate to a ground war by calling up the reservists.

And aside from military movement, another dynamic may be fueling the unrest, one that makes the Abu Khdeir case exceptional for more than its brutality: Experience has led Palestinians to believe they rarely get justice when their attacker is Israeli. The arrest of six Jewish Israelis in the Abu Khdeir case is, according to human rights activists and frustrated Palestinians, the exception that proves the rule.

“Our database shows you when an Israeli commits an offense against a Palestinian, it will almost never be prosecuted,” said Reut Mor, a spokesperson for the Israeli human rights and legal defense group Yesh Din. Between 2005 and 2013 only one in a dozen investigations of crimes committed by Jewish Israelis against Palestinians ended in indictment, the database shows: 84% of cases were closed without action.

The figures were gathered on the occupied West Bank, where militant Jewish settlers have for years been engaging in the kind of attacks that in the last week have spread throughout Israel—beatings, stonings, vandalism and confrontations designed to intimidate. But Israelis themselves make scant distinction between Jews living on the West Bank and within Israel proper, either in terms of citizenship or in the collective soul-searching the Abu Khdeir death has prompted in the Israeli media.

Polls show Israelis have grown not only more conservative, but also steadily less tolerant of Palestinians in their midst. At the same time, some commentators say the actions of Jewish extremists have now stained the entire society. “For too long we persuaded ourselves that if we only let the people who incite and vilify blow off steam, they would make do with words and not move into the realm of action,” the conservative columnist Ben-Dror Yemini wrote Monday in the daily Ma’ariv. Said editor David Horovitz in his Times of Israel news website: “We need to face up to the fact that our ongoing rule over the Palestinians, apart from endangering Israel as a Jewish democracy, is corroding us, blackening our hearts.”

Incidents have grown both in number and violence in recent days. On Saturday night in the West Bank village of Osarin, south of Nablus, Tariq Adeli, 22, was grabbed from behind and a cloth with some kind of knockout drug held against his face as he waited in the street. “I felt as if I had been thrown up in the air,” he later told his roommate in the Nablus hospital where doctors set the bone in a leg nearly sheared off by his assailants. They had pulled him into their car, clubbed him with something like a hatchet, and thrown him into the ditch below a road leading to a nearby settlement, he said.

The assailants were believed to be settlers who had been scouting the village on scooters and four-wheelers in recent days. “All I was going to do was watch the soccer match,” Adeli told TIME. “I am not involved politically what so ever. What have I done to these settlers to deserve having them gang up on me and cut my leg off, or is it just because I am a Palestinian?”

Israeli officials say they’re hoping for calm, banking heavily on the arrest of the Abu Kdeir suspects even as they eye a military escalation. “We captured them so quickly, and hope it calms down quickly,” said Amos Gilad, a senior official in the Ministry of Defense. He made the remarks during a news briefing on the Gaza offensive, which he said would gradually escalate until Hamas stopped firing rockets. The West Bank, he said, was a different situation entirely, or would be before long. “We are not only using power,” Gilad said, “we are using respect toward the Palestinians.”

A flurry of other attacks were also reported on the West Bank. A Palestinian priest’s car was stoned by settlers north of Ramallah. A farm was set alight south of Nablus last Wednesday, the words “blood vengeance” spray-painted on a wall. Over the weekend, settlers swarmed out of their guarded compounds toward Nabi Saleh, Deir Nidam and even Ramallah. In the village of Ein Abous south of Nablus early Monday, residents saw settlers from the notoriously militant Yitzhar settlement coming down the hill and called Palestinian authorities, who alerted the Israeli military. An Israeli patrol promptly appeared—something advocates called highly unusual.

“Usually, when settlers gather and throw stones, the military stand by and watches, and when the villagers throw stones back, the soldiers respond by firing tear gas and rubber bullets at the Palestinians,” said Mor, the Yesh Din spokesperson. “This is the usual dance.”

But the situation has grown so combustible in the last two weeks—570 Palestinians were injured in the first seven days of July, according to United Nations figures—that the Israeli army has taken the extraordinary step of stationing troops at the entrance to the most notorious settlements. Most are located around Nablus in the northern West Bank, although a Palestinian was beaten in the hills south of Hebron, where militant settlers routinely throw stones at Palestinian on their way to school. “They’re so worried, they are finally getting involved when settlers attack,” More said of the Israeli military.

Violent encounters also continue inside Israel. Palestinians in the Sheikh Jarrah neighborhood of Jerusalem were attacked by a crowd of 50 on Saturday night. Occupants of a car opened fire on Palestinians in East Jerusalem on Monday night. And an NPR reporter and his Palestinian interpreter were stoned by Jewish settlers in Jerusalem’s Old City neighborhood, where police downplayed the significance of the attack.

The situation could well deteriorate as the death toll climbs in Gaza, and protests erupt in solidarity with the “martyrs.” That’s how young Samer Msaeh ended up in the bed next to Tariq with a bullet in his left leg—shot by an Israeli soldier while protesting the deaths of two other Palestinians.

“If it explodes somewhere, it explodes everywhere, even in ’48,” said his father Ryad Msaeh, referring to Israel proper. “In the end they’re all Palestinians, even if they’re inside the Green Line.” 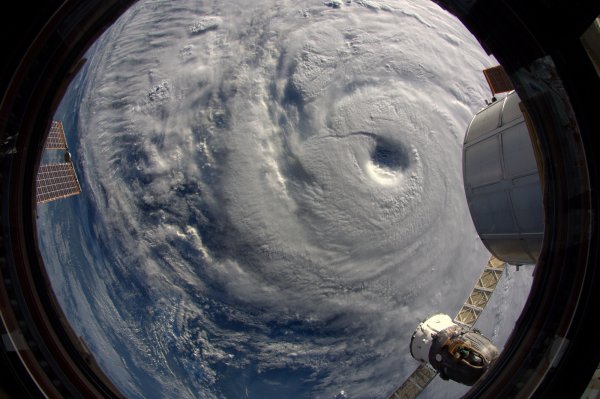 This Is What Supertyphoon Neoguri Looks Like From Space
Next Up: Editor's Pick