How Transformers 4 Became the No. 1 Film in Chinese History

A model of the character Optimus Prime is displayed on the red carpet before the world premiere of Transformers: Age of Extinction in Hong Kong on June 19, 2014
Siu Chiu—Reuters
By Nash Jenkins

The latest film in Michael Bay’s Transformers series was largely set in China, had its premiere in the Chinese territory of Hong Kong and is now the highest-grossing film in the country’s history, having earned $222.74 million in ticket sales in less than two weeks.

It dethrones James Cameron’s Avatar, which made slightly less when it premiered in early 2010.

Given that critical reaction to Transformers: Age of Extinction has been almost conspiratorially negative across the board — Richard Roeper called it “relentless,” and not as a compliment; Peter Travers at Rolling Stone refused to give it even one star — much of the coverage of its success in China has been, well, pretty darn condescending: “Chinese people are dazzled by anything Hollywood, etc.”

The reality is more complex. If the bar of cinematic quality is indeed set lower in China, the tastes of its 1.3 billion people aren’t necessarily to blame. The Chinese Communist Party is exceedingly picky about the films screened in the country, especially in the case of foreign cinema; so if a movie does well, one can ultimately thank the government.

The long and the short of it: Bay made a movie set and filmed in China, starring Chinese actors, using Chinese resources and pushing Chinese products, and in exchange, the movie gets a timely premiere across the country’s 18,000-plus movie screens.

And timely is the operative word here. According to a diligently researched report from Quartz, Transformers: Age of Extinction is one of the few Western blockbusters to arrive in China contemporaneously with its premiere in the U.S. and elsewhere — thereby minimizing the market opportunity typically seized by bootleggers hawking pirated copies and so boosting box-office sales.

Some critics have scoffed at the outcome of the necessary negotiations, though, calling it at best clumsy — one overt product placement features a man in the middle of Texas withdrawing cash from a China Construction Bank ATM — and at worst just plain shameless — as car robots terrorize semiautonomous Hong Kong, one policeman insists on “[calling] the central government for help.” But as China’s box-office market is the largest outside of North America, and expected to usurp the U.S. as the biggest in the world by the end of the decade, Mr. Bay, we can assume, is laughing all the way to the bank. 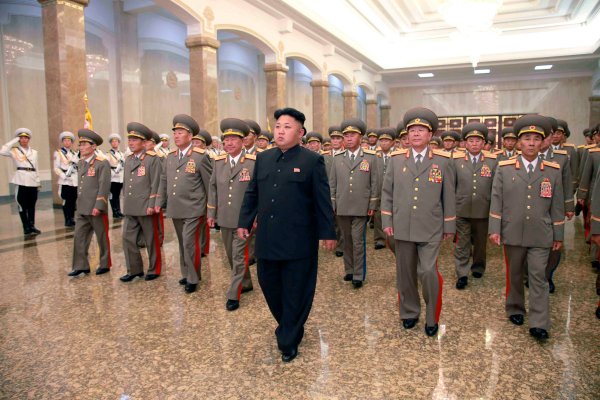 20 Years After His Death, Kim Il Sung Still Casts a Powerful Spell Over North Korea
Next Up: Editor's Pick