It's Not Just Putin: Russia's Obsession With Crimea Is Centuries-Old

President Vladimir Putin delivers his address on the Crimean referendum on reunification with Russia in the Grand Kremlin Palace in Moscow, on March 18, 2014.
Sergei Ilnitsky—EPA
By Ishaan Tharoor

The opening ceremony at the Sochi Winter Olympics included a cinematic montage of Russian history. Its first scene depicted a group of bearded Greeks on an oared galley, rowing through dark waters. They come ashore by an empty expanse of land and triumphantly establish their settlement: this, the viewer is supposed to understand, is the founding moment of Russian civilization.

Where was this hallowed ground? Crimea—the Black Sea peninsula in the eye of a geopolitical storm right now.

Its unilateral secession from Ukraine after a Sunday referendum and de facto annexation by Russian President Vladimir Putin on Tuesday drew the ire of Europe and the U.S. as well as the revolutionary government in Kiev, which Moscow refuses to recognize and which looked on impotently as Russian troops fanned out across the peninsula. Tensions are rising. Ukrainian officials reported the death of one of their soldiers posted in Crimea in a clash with Russian forces, while rumors of a possible Russian incursion into eastern Ukraine grow louder. Struggling for options to dial back Russia’s territory grab, U.S. Secretary of State John Kerry warned that the “nationalistic fervor” on display echoed the heated, dangerous mood in Europe before the start of World War II.

But Moscow’s interest in Crimea dates well beyond that, no matter what historical analogy pundits or politicos choose to explain Putin’s power play in Ukraine. The first Russian potentate to convert to Christianity did so, according to lore, more than a thousand years ago with the aid of a Byzantine Orthodox priest in the former Greek colony of Khersonesos, near the modern Crimean port of Sevastopol. In a speech delivered Tuesday morning to justify the current incursion, Putin reached back and invoked this narrative. “Everything in Crimea speaks of our shared history and pride,” said the Russian President. “This is the location of ancient [Khersonesos], where Prince Vladimir was baptized in [988 AD]. His spiritual feat of adopting Orthodoxy predetermined the overall basis of the culture, civilization and human values” of all Russians.

Putin is hardly the first Russian leader to cast Crimea—for centuries home to a hodgepodge of Muslim Turkic nomads, forgotten Jewish sects, and Greek and Italian merchants, to name only a few of its myriad inhabitants—as a sacred site of Russian Orthodox culture. When the Tsarina Catherine the Great annexed the peninsula in 1783, she proclaimed it an eternal part of Russia. Her imperial courtiers then adopted the Greek name for Crimea—Taurica—instead of the Turkic Krim (or Crimea) used by the region’s native Muslim Tatars (for whom the misery was just about to begin). Russian supremacy over the Black Sea, as far as Catherine was concerned, could restore the glory of the fallen Byzantine Empire, lost to the Muslim Ottomans. On a famous tour of the empire’s conquered Black Sea territories, writes the historian Orlando Figes, the empress passed beneath archways that were inscribed with the phrase “The Road to Byzantium.”

Russian imperial hubris would in part provoke the bloody Crimean War of the mid-19th century: a bumbling conflagration of Europe’s Great Powers that saw somewhere between half a million to a million people die. It may have spawned the age of war photography, but it also led to more myth-making. The Russians endured a grinding, year-long siege at Sevastopol that, despite their heroics, resulted in the eventual Russian surrender; nearly a century later, Sevastopol’s Soviet defenders were almost wiped out in a doomed bid to repel the encircling Nazis. All this provides chords for Putin’s violin: “Where national memories are concerned,” said Ernest Renan, the foremost 19th century theorist of European nationhood, “griefs are of more value than triumphs.”

Now, griefs—or, more accurately, grievances—are being turned into triumphs. Former Soviet leader Mikhail Gorbachev told Russian media that the annexation of Crimea, which after decades of resettlement and the slaughter and forced exile of many Tatars had become majority Russian, would redress a Soviet-era “mistake” of attaching the peninsula politically to the Ukrainian republic. Putin, in his Tuesday speech, lamented how the disintegration of the U.S.S.R. transformed tens of millions of Russians into minorities living in new states to which they didn’t necessarily want to belong. Putin then fired his rhetorical cannon: “It was only when Crimea ended up as part of a different country that Russia realized that it was not simply robbed, it was plundered.”

As Crimean politicians journey to Moscow to now kiss the ring, it remains to be seen where Russia’s resurrected ambitions may end. Putin has provided the historical canvas. But, unlike the montage at Sochi, what’s next won’t be fun and games. 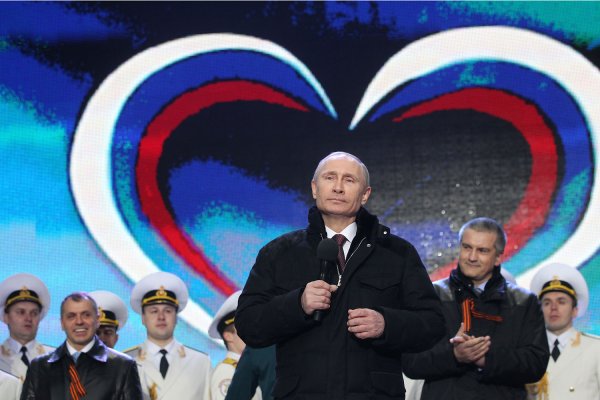